Reflections in a Golden Eye (film)

Reflections in a Golden Eye (film) 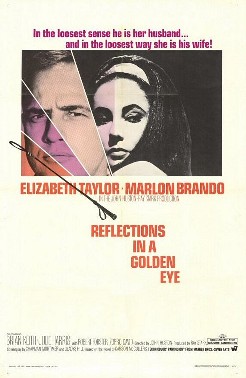 "Reflections in a Golden Eye" is a 1967 film directed by based on the 1941 novel of the same name by that deals with the theme of repressed . The film starred , , and .

It is a tale of six central characters, their failures, obsessions and darkest desires. Set in a military camp, it tells the story of Captain Weldon Penderton and his wife Leonora. Other central characters are Major Morris Langdon and his sick wife Alison, the Langdon's houseboy Anacleto and a mysterious soldier, Private Williams.

Originally to have starred , Clift died of a heart attack (possibly brought-on by his years of alcohol and substance abuse) before cinematography commenced on the film. The role subsequently went to Brando.

The story begins at an Army base in the 1940's. Capt. Penderton assigns Pvt. Williams to a private house call instead of his usual duty, which is maintaining the stables. Meanwhile you are introduced to Capt. Penderton's wife, Leonora, who is about to go horseback riding with Maj. Langdon. From the first scene with Leonora the viewer is aware of her extramarital affair with Langdon, as well as her strong bond with her horse, Firebird. Also a point made in the film is Williams's strong bond with all the horses in the stable.

Leonora and Penderton have an argument that same night which Williams witnesses through a window of their home, which develops into Williams spying on them from outside at first, then breaking into the house and watching Leonora sleep at night. As the nights continue Williams starts to shift through her feminine things, and caresses her lingerie.

Penderton takes Leonora's horse and rides into the woods, but he falls off and is dragged a distance by the horse. He then beats the horse. Pvt. Williams while naked comes to the horse and brings him back to the stable to tend the horse's wounds. Penderton starts to follow Williams around the camp. Upon finding out about her horse, Leonora interrupts her own party and repeatedly strikes her husband in the face with her riding crop.

Alison Langdon, the wife of Maj. Langdon is recovering from having sliced off her nipples with a pair of pruning shears, the apparent result of depression following the death of her newborn child. Alison's only bond is with her extremely effeminate Filipino houseboy. Alison being very aware of her husband's adulterous behavior decides to divorce him, but is then forced into an asylum by her husband as she tries to leave him. Her husband tells Leonora and Penderton that Alison was going insane, but she was not. Then Penderton is informed that Alison had a heart attack, but the truth being she killed herself.