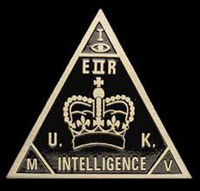 Original MI5 logo. Believed to be pre-1955 or as part of their 1950s to 1970s official insignia[citation needed] It features the Eye of Providence, also known as the all-seeing eye

The Directorate of Military Intelligence (DMI) was a department of the British War Office.[1]

Over its lifetime the Directorate underwent a number of organisational changes, absorbing and shedding sections over time.

The first instance of an organisation which would later become the DMI was the Department of Topography & Statistics, formed by Major Thomas Best Jervis, late of the Bombay Engineer Corps, in 1854 in the early stages of the Crimean War.[2]

When the War Office was subsumed into the Ministry of Defence in 1964, the DMI was absorbed into the Defence Intelligence Staff (DIS), with some functions divested elsewhere in the MoD.

Two section titles, MI5 and MI6, remain in colloquial use in the United Kingdom and elsewhere to refer to the Security Service and the Secret Intelligence Service, although neither organisation has been officially titled as such since the late 1920s.