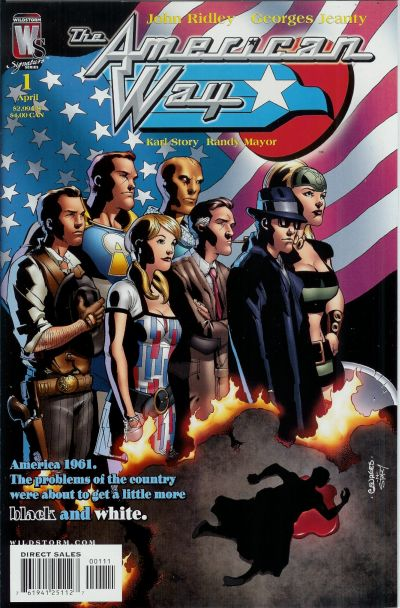 In an interview with , John Ridley stated that the inspiration for this story came from President 's wish to include an African-American in the Mercury Space Program. [ [http://www.npr.org/templates/story/story.php?storyId=9957776 A Disenchanted Look at 'The American Way' : NPR ] ]

The series represented a skewed parallel history of America, where the United States Government created its own super powered "heroes" and "villains". In the early 1940s, the United States government hatched a plan to create the Civil Defense Corps: a group of supposed "super-heroes" who could fight alien invasions, evil super-powered beings, and communism, all in front of an adoring public, courtesy of television. When an African-American hero named the New American is inserted into 1962's premier superteam, the turmoil begins.

The first issue introduces the Civil Defense Corps, a team of superheroes, and their handlers the FDAA (Federal Disaster Assistance Administration). The FDAA stages showdowns between "superheroes" and "supervillains", who are in reality little more than superpowered actors that front for the public. The FDAA is put on the spot when Old Glory, a hero representing the epitome of American ideals, dies of a heart attack during a staged superhero battle. [The American Way issue #1.]

The New American is introduced in the next issue. Offered as Old Glory's replacement, the New American is secretly an African American man named Jason Fisher. Jason was selected by the FDAA to undergo gene therapy treatments that gave him superstrength and invulnerability, but with a built in weakness: Jason had the pain receptors of a normal human, so that if he was subjected to enough pain he would die even if his skin remained unbroken. The New American is outfitted in a helmet and a pseudo Astronaut's uniform, because 1962 America was depicted in the series as not ready for a minority superhero. [The American Way issue #2.]

The New American is accidentally "unmasked" at the end of the third issue, while battling a crazed Wanderer. [The American Way issue #3.]

In the fourth issue the FDAA unleash Hellbent, a homicidal and sociopathic supervillain, to draw attention away from the racial strife caused by The New American's unmasking. The team is split in half along racial views with the southern heroes leaving in disgust. Most of the rest go to confront Hellbent, who has slaughtered a busload of people on their way to a civil rights rally. They fail miserably, with CDC members Freya being decapitated, Pharos wounded, and The Secret Agent losing a hand. The New American's brother was among the wounded survivors.

In the fifth issue it is revealed that The New American's brother was the sole survivor of Hellbent's slaughter but was tortured and left paralyzed. Members continue to debate recent events. The New American escapes to seek revenge on Hellbent after battling his teammates, thus defying the order not to cross the Mason-Dixi line. After this is found out by the SDU they go on to try and track him down. The New American eventually tracks down Helbent in a secluded cabin in the forest. After a heated battle Helbent is killed by The New American, but not before he is told the Helbent had raped his brother and crushed his spine.

After the incident the SDU finds The New American. fearing for his life he attempts to flee, but is unsuccessful. Just as it looks as though he might die

*Amber Waves - Can wield energy that allows her to generate forcefields and other shapes similar to , and fly. Former girlfriend of Muscle Shoals from the Southern Defense Corps. Her name comes directly from the lyrics to America the Beautiful.
*East Coast Intellectual - An old-school pulp character, based on the supergenius archetype embodied by characters like , and modern characters like Will Magnus and Reed Richards. His power is super intelligence.
*Freya - A self-proclaimed Asgardian goddess and Thor analog, who was decapitated by the villain Hellbent with her own "magic axe". [The American Way issue #4.] Her sister "Skadi", presumably also an Asgardian, shows up for her funeral in the next issue. [The American Way issue #5.] In actual Skadi was married to and was therefore stepmother to Freya and her brother Frey. Freya's true mother is never named.
*New American - Jason Fisher, an African-American, is given invulnerability and superstrength by the FDAA. His invulnerability comes with a catch: the project left him with the pain receptors of a normal human. According to FDAA scientists he is almost as strong as Muscle Shoals.
*Old Glory - A chain-smoking, sixgun toting patriotic hero, with a faked generational backstory similar to that of Uncle Sam. He dies of a heart attack during a faked fight with Johnny Lau the Red Terror. [The American Way issue #1.]
*Pharos - An alien analog due to his powers and relationship with a female reporter. He is incredibly powerful but plagued by doubt and indecision. The CDC's FDAA handlers have no idea how powerful he really is, or where he got his powers. He has demonstrated, flight, invulnerability, heat vision, and a weakness to magic (the wound from Freya's magic axe won't heal). As evidenced by the symbol on his costume, the name Pharos comes from the .
*Secret Agent - Another old-school pulp analog in the vein of G-8 and , with superhuman reflexes and heightened deductive capabilities. He has also demonstrated an uncanny shooting skill that allows him to predict the path of his ricochets and plan for them. In issue #3 he calls himself a "genetically juiced-up super shooter".
*The Wanderer - An actor named Paul Simms. Simms played "The Wanderer from Dimension 8", an alien ally similar to the , and wore a special costume and flight pack. He was also used as a test subject for FDAA's inventions, which gave him powers that varied from mission to mission. He later gained telekinetic powers and killed his entire family, before being stopped by the Civil Defense Corps. In the ensuing battle, the New American's faceplate was smashed, and nearby reporters captured it on film. [The American Way issue #3.]
*X-15 - A loudmouthed racist with a cruel streak, X-15 is a super speedster in the vein of the Flash. He is only interested in his salary, and asks for a pay raise whenever one of his teammates dies. Named after the / from the X-plane series of 1960's experimental aircraft.

*The Captain - A precognitive hero who dresses and looks like and affects all of Twain's mannerisms, constantly quoting words of wisdom originally written by Twain, demonstrating a moderate non-racist outlook. Also wears a white suit and always has a smoking pipe. He has no problem with the New American being on the team. His name might be based on a Mark Twain story titled . Or "Captain" a term of respect that originated in the regional vocabulary of Southern Louisiana.
*Mighty Delta - A racist or Captain Marvel analog, with super strength, flight and energy vision. Mighty Delta rarely has an opinion of his own, but is led by the strongest personality around him, which in this case is Southern Cross. His name is a reference to the .
*Mister Lucky - Luck powers and the ability to charge playing cards with an unknown energy similar to Gambit. Both in design and costume he resembles from "Gone with the Wind". Unlike Southern Cross he is a moderate racist.
*Muscle Shoals - An illiterate, kind hearted invulnerable hero. He is the strongest member of the Souther Defense Corps, and possibly the strongest member of the formerly united CDC. Also Amber Waves' ex-boyfriend. He has no problem with the New American being on the team, but is confused by the constant racist rhetoric of those around him. Named after the city of .
*Ole Miss - Has the power to turn back local time in order to save the lives of her teammates, but every time she does so, she loses a little over three months from her own life. She has brought Southern Cross back from the dead so many times, that he's cost her a year and a half of her life. She can also permanently age her enemies to dust if she wishes. This use of her powers does not affect her in a detrimental way. She has no problem with the New American being on the team.
*Southern Cross - A powerful southern and hotheaded racist. He can cover his body in flames and fly. His costume is similar to that of the , but is white and black with a cross on it.

*Hellbent - A super-intelligent serial killer, hired assassin and cult leader formerly in the employ of the US government. He goes rogue after killing a bus full of African-American activists, a rogue group of heroes from the CDC (the Secret Agent, Pharos and Freya), track him down with the intent of ending his threat permanently. During the fight he decapitates Freya with her own magic axe, wounds Pharos' face and chest with the axe, and lops off one of the Agent's hands. He was later tracked down and beaten to death by the New American. [The American Way issue #6.]
*Red Terror - A Chinese-American actor named Johnny Lau. Lau was employed by the FDAA to play the Red Terror while wearing a special flight pack. After Old Glory's death while fighting him in a mock battle, Lau's paranoid fear that the FDAA was going to kill him and his delusion that he had actual superpowers led him to jump from a rooftop to his untimely death. [The American Way issue #2.]

The series has been collected into a trade paperback: