The New York shirtwaist strike of 1909, also known as the Uprising of the 20,000, was a labor strike primarily involving Jewish women working in New York shirtwaist factories. Led by Clara Lemlich and supported by the National Women's Trade Union League of America (NWTUL), the strike began in November 1909. In February 1910, the NWTUL settled with the factory owners, gaining improved wages, working conditions, and hours. The end of the strike was followed only a year later by the Triangle Shirtwaist Factory Fire, which exposed the plight of immigrant women working in dangerous and difficult conditions.

The population of New York City was more than half immigrant in the early 1900s. These immigrants came from a wide variety of backgrounds, and crowded into immigrant neighborhoods like the Lower East Side of Manhattan Island, which at the time had one of the highest population densities in the world. Many of these immigrants, men, women, and children alike, worked for low pay in factories with terrible working conditions to help support themselves and their families. But they were also exposed to a bustling new world, and to the political and union organizers therein. Immigrant women especially often came from conservative social backgrounds which limited their interaction with men and people outside the family. But New York in the early 1900s provided the opportunity for these women to explore such social interactions, and exhibit a new level of independence.[1]

Many of these women immigrants toiled in the garment industry, which was New York's best known industry at the time.[1] They worked not for a single, large conglomerate but many smaller companies spread across lower Manhattan, among the largest of which were the Triangle and Leiserson shirtwaist factories.[1][2] This workforce was more than 70% women, about half of whom were not yet twenty years old, and about half of whom were Jewish and a third Italian.[1] In the production of shirtwaists in particular, the workforce was nearly all Jewish women. Some of them had belonged to labor unions in Europe before their immigration; many of the Jewish women in particular had been members of the Bund. Thus, they were no strangers to organized labor or to its tactics. Indeed, Jewish women who worked in the garment industry were among the most vocal and active supporters of women's suffrage in New York.[2]

Garment industry workers often worked in small sweatshops, with the men doing the higher-paid work of cutting and pressing while women were paid less for assembling and finishing garments.[1] Work weeks of 65 hours were normal, and in season they might expand to as many as 75 hours. Despite their meager wages, workers were often required to supply their own basic materials, including needles, thread, and sewing machines. Workers could be fined for being late for work or for damaging a garment they were working on. At some worksites, such as the Triangle Shirtwaist Company, steel doors were used to lock in workers so as to prevent workers from taking breaks, and as a result women had to ask permission from supervisors to use the restroom.[2] 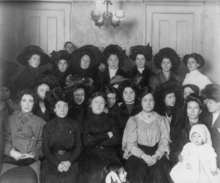 In September 1909, the workers at the Triangle Shirtwaist factory took a vote to determine whether they would continue to participate in a company-sponsored benevolent association or to organize under the United Hebrew Trades (UHT), an association of Jewish labor unions. The vote was in favor of the UHT, but the workers who had organized the vote were immediately fired by Triangle, and the company began advertising for replacements. In response, the workers at Triangle walked off the job, supported by Local 25 of the International Ladies' Garment Workers' Union (ILGWU) which had called for a strike.[2]

The workers began picketing in front of the company, which hired men to help break up the strike, referred to by historian Howard Sachar as "company goons". These men disrupted the picket lines, insulting, threatening, and even being physically aggressive towards strikers. New York's police also assisted the company, arresting some of the picketers under various crimes including vagrancy and incitement. After five weeks, in response to concern that the strike might break, an emergency meeting of shirtwaist workers was called at Cooper Union. Various labor leaders spoke to the crowd, including Samuel Gompers and Meyer London. But it was a newcomer, a woman named Clara Lemlich who called for a general strike of shirtwaist workers. Speaking in Yiddish to a mostly Jewish crowd, Lemlich described the indignities of sweatshop labor, from being insulted by bosses to not having a place to hang a hat. Her speech led to a general strike of shirtwaist workers across New York City, approximately 20,000 strikers in all.[2]

Employers across the industry responded as Triangle had, and within a month more than 700 women had been arrested by police, 19 of whom were sentenced to time in a workhouse. One judge accused the women of being "on strike against God", because he believed that God intended man to earn their way through hard work alone.[2]

However, public opinion turned against the companies. The image of young women being bullied by the police and company guards inspired sympathy, even among New York's upper crust. Some of New York's wealthiest women even bailed strikers out of jail and marched with them on the picket lines. Media coverage tended to support the strikers, and both Christian and Jewish religious leaders spoke out on behalf of the workers. The strike also took place in the midst of the Progressive Era, and activists, suffragettes, and political leaders offered support.[2]

Bowing to public pressure, and concerned that the strike would continue through fashion season, the shirtwaist companies agreed in early 1910 to negotiate with the workers. Two weeks after bargaining began, an agreement was reached. The work week was limited to 52 hours, workers were given four holidays with pay, employers were required to supply all tools necessary for the job, and a grievance committee was established to deal with individual issues that came up.[2]

The successful strike marked an important milestone for the American labor movement, and especially for garment industry unions. It was the first successful major uprising of female workers in American history. In addition, Clara Lemlich became a minor star; three novels published soon after the strike had protagonists with her name.[2]