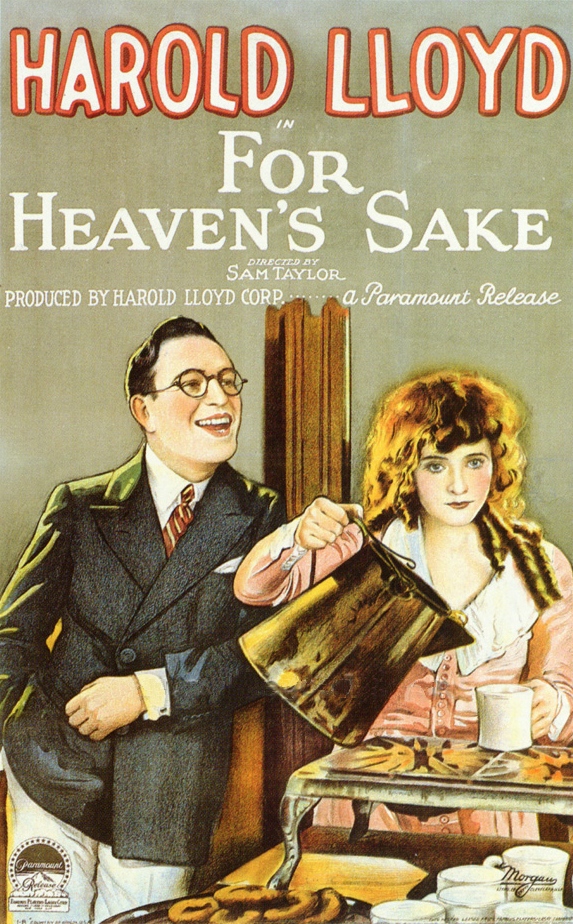 caption = Poster
director = Sam Taylor
producer =
writer =
starring = Harold Lloyd Jim Mason (as James Mason)
music =
cinematography =
editing =
distributor =
released = , (US premiere)
runtime = 58 minutes
country = USA
language =
English intertitles
budget =
preceded_by =
followed_by =
amg_id = 1:18129
imdb_id = 0016895 "For Heaven's Sake" is a 1926 comedy starring . It was made just before one of Lloyd's most critically-praised films today, "". Commercially, it was one of Lloyd's most successful films and the 12th highest-grossing film of the silent era, pulling in $2,600,000.

J. Harold Manners (Lloyd) is a millionaire playboy who accidentally finds himself in the poor part of town one day.

There, he unknowingly gives a man enough money to start a religious mission. Once he hears that a mission was started in his name, he goes there to tell them to take his name off since (as he believes) he didn't have anything to do with it. Once there, however, he falls for the Downtown Girl, Hope (Ralston) who works in Brother Paul's (Weigel) rebuilt mission. In order to build up attendance, and win Hope's attention, Harold runs through town causing trouble, and winds up with a crowd chasing him right into the mission. He eventually wins the girl and they marry, but not without some interference from his high-brow friends.

In the late 1920's, Lloyd alternated between making what he called "gag pictures" and "character pictures". This was a "gag picture", made between what are considered by many to be two of Harold Lloyd's best "character" films: "The Freshman" (1925) and "" (1927).

This was the first Lloyd film distributed by , and was a difficult production for Lloyd and his film company. Numerous scenes were filmed and later cut from the release version. Some of the cut elements, especially an underworld theme, were incorporated into Lloyd's 1928 film "". Lloyd was somewhat disappointed in the final product, and considered shelving the picture. However, it grossed over 2 million dollars upon release, and is still a highly entertaining film for modern audiences.