Sorry Seems to Be the Hardest Word

Sorry Seems to Be the Hardest Word

Infobox Single
Name = Sorry Seems to Be the Hardest Word

"Sorry Seems to Be the Hardest Word" is a song written by and . It was recorded by Elton John and released in , both as a single and as part of the "" album. It was his second single on . The song is a mournful ballad about unrequited love. It was also one of the rare instances where Elton John himself wrote much of the lyric. Whereas most of the John-Taupin songs began with Taupin's lyrics, this one began with John's melody, with some lyrics included. Taupin simply finished them.

The song has been covered by R&B singer . The song was also covered by and featured in his "Joe Cocker's Greatest Hits" album.

Country singers and covered the song on their 1994 "Simpatico" and released it as a single but failed to chart on the chart.

In 2002, Blue covered this song, but they had help from Elton John who appeared in both the recording and the music video as 'Featured Artist'. and Elton John also recorded this song as a 'duet' in Ray's 2004 posthumous release "". In 2006 this song was covered by on his CD .

The video of "Sorry seems to be the hardest word" depicts the story of an unrequited love of a male youth who wants to take revenge on that reluctant girl, he was in love with. At the end of the video he and the best friend of the girl are a couple and so the friendship of the two girls is actively threatened. Because the guy tells a lot of gossip and untruths about the girl, who did not return his affection in the beginning. There was also a video produced where John sits alone at a white piano.

Infobox Single
Name = Sorry Seems To Be The Hardest Word 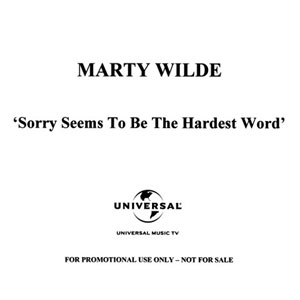 The song was covered again in 2007 by , a rock and roll star who made his name as a singer in the 1950s and 1960s, and during the 1980s co-wrote several hit singles for his daughter . For his 2007 "Greatest Hits" compilation album, he recorded some new tracks including this one as a duet with his daughter. The two had previously performed the song together twenty years prior to this at an AIDS benefit concert. The Wildes chose to record this song for the new compilation in honour of Elton John's 60th birthday. It was released as a promotional-only single in the UK.