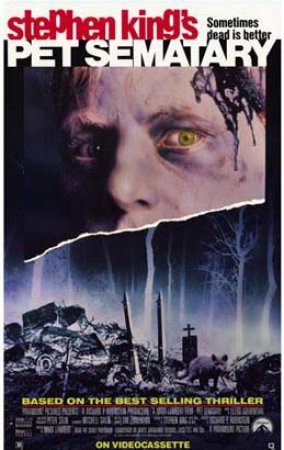 "Pet Sematary" (sometimes referred to as "Stephen King's Pet Sematary") is a 1989 adaptation of the novel of the same name. Directed by , the film stars as Louis Creed, as Rachel Creed, as Ellie Creed, as Gage Creed, and as Jud Crandall.

Stephen King wrote the screenplay himself, having become frustrated with how his novels were represented in film adaptations, and appears briefly in the film as a minister at a funeral.

The plot revolves around the of deceased pets and humans in an abandoned outside the town of . The Creed family moves into a new home and befriends their new neighbor, Jud Crandall, who tells them about a and the burial grounds nearby, leading to a series of horrifying events.

Produced by Richard P. Rubinstein, Executive Produced by Tim Zinneman and Co-Produced by Mitchell Galin. Directed by . wrote both the novel and the screenplay for the movie. The soundtrack was composed by . The end credits contained a song, called "Pet Sematary", by band, , which was a radio hit and was later released on their 1989 album "Brain Drain". The end of also had play their hit "Poison Heart" in the end credits. ;Cast
* as Louis Creed
* as Jud Crandall
* as Rachel Creed
* as Victor Pascow
* as Irwin Goldman
* as Gage Creed
* as Ellie Creed
* as Missy Dandridge
* as Marcy Charlton
* as Steve Masterton
* as Dory Goldman
* as Zelda
* as Jud as a child
* as Jud's mother
* as Minister
* as Rachel as a child
*Chuck Courtney as Bill Baterman
* as Timmy Baterman
* as Ellie Creed II

The documentaries feature interviews with , , , , director , , and other members of the cast and crew.

Despite an initially positive reception by many eminent critics, "Pet Sematary" generated mostly mixed reviews, and was considered to be a moderate box office hit of that year, taking in $16 million in its first week at the North American box-office. The controversial nature of the film may have led to some of its alleged "unviewability", and "Pet Sematary" remains to this day banned in several countries. Nevertheless, it has recently developed an ardent following. 'This is the first screenplay that Stephen King has adapted from one of his own novels, ' wrote Films and Filming, in November 1989 'and while it is a generally competent effort, there some absolute howlers in the dialogue...There is also a taut Halloween-style ending that almost justifies the preceding hour and a half. But ultimately there are still too many unanswered questions.' Fear magazine wrote 'The viewer is made to feel personal grief with some realism, and that's something which most horror film-makers have never handled or been willing to handle.' Mary Lambert was quite protective of her work "Pet Sematary" is about a love of a father for his child that is obsessive to the point of breaking certain taboos, passing certain boundaries that shouldn't be passed. I think I brought a sense of mystery and mysticism to the story that they were looking for. There are certain aspects of this story that take it beyond just another horror movie."