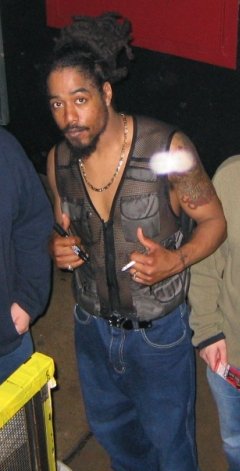 Afu-Ra is a hip hop artist from . Afu, born Aaron Phillip, is a devout student of the , as well as . Afu is a member of the Foundation, alongside rappers like Jeru the Damaja, Big Shug and , and is most well known through his affiliation with the foundation and . [ [http://www.allmusic.com/cg/amg.dll?p=amg&sql=11:hbfwxq9jld6e~T1 allmusic ((( Afu-Ra > Biography ))) ] ] His first appearance was on Jeru's classic 1994 album "", on the song "Mental Stamina". He made another appearance on Jeru's second album "", on the track "Physical Stamina", in 1996. Afu's debut single, '"Whirlwind Thru Cities", was released in 1998, reaching the top 20 on Billboard's Hot Rap Singles chart. In 1999, he released his second single, "Defeat" b/w "Mortal Kombat". His anticipated debut album, "", was released in October 2000. The album featured production from a number of prominent Hip Hop beatmakers, including , , and . Guests included 's and , , and the . "Whirlwind Thru Cities", "Defeat" and "Mortal Kombat" were included here, as well as the singles "Equality", "Big Acts, Little Acts" and "D&D Soundclash". Afu released his second effort "" in May 2002, featuring production from DJ Premier, Curt Cazal, True Master, , Needlez, Domingo and Ayatollah. Guests included Hip Hop legends Guru, , as well as R&B star . In 2004, he released a compilation album titled "Afu-Ra presents Perverted Monks". He returned with another album in 2005, "". DJ Premier returned once again to produce the single "Sucka Free". Wu-Tang's Masta Killa appeared on the song "Livin' Like Dat", and underground favorite appeared on "Pusha". Afu was working on another album, which was prepped for a 2007 release, but it has not appeared to date.