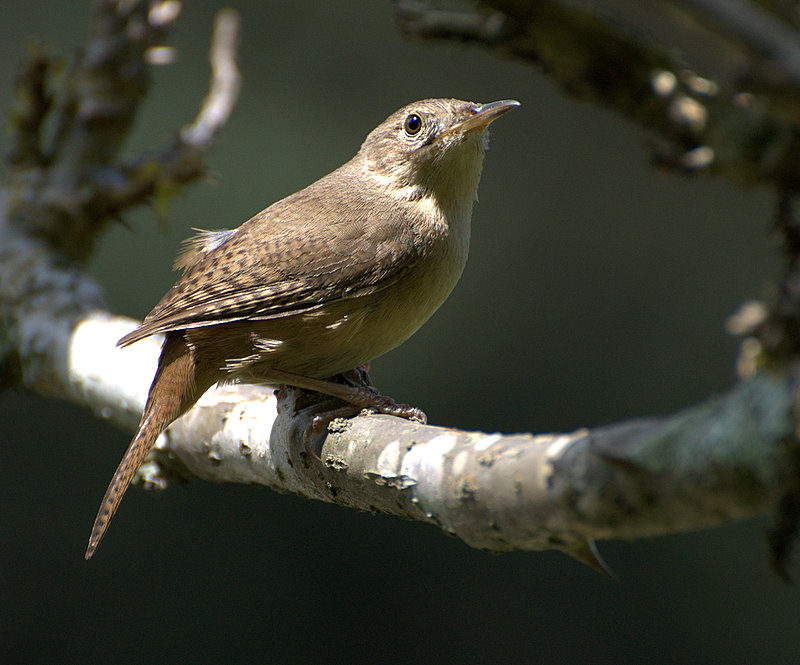 The House Wren, "Troglodytes aedon", is a very small of the family, Troglodytidae. It occurs from to southernmost , and in most of suburban America it is the single most common wren. Its is highly complex and some groups are often considered separate species.

__TOC__Adults are 11.5 cm long and weigh 12 g. The vary greatly, with upperparts ranging from dull greyish-brown to rich rufescent-brown, and the underparts ranging from brown, over buff and pale grey, to pure white. All subspecies have blackish barring to the wings and tail, and some also to the flanks. All subspecies show a faint eye-ring and eye-brow and have a long, thin bill with a blackish upper mandible, and a black-tipped yellowish or pale grey lower mandible. The legs are pinkish or grey. The short tail is typically held cocked.

This bird's rich bubbly song is commonly heard during the nesting season but rarely afterwards. There is marked geographical variation in its song, though somewhat more gradual than in the birds' outward appearance which can strikingly differ e.g. on neighboring islands in the

In , the House Wren is thought to achieve the highest density in floodplain forests in the western great plains where it uses woodpecker holes as nesting sites. In South and Central American it can be found in virtually any habitat and is, as indicated by its , often associated with humans. North American birds migrate to the southern and for winter. Most return to the breeding grounds in late April to May, and leave for winter quarters again around September to early October [OOS (2004)] . These birds forage actively in vegetation. They mainly eat s such as butterfly larvae, also s and s.

The nesting habits do not seem to differ significantly between the Northern and Southern House Wrens at least. They usually construct a large cup nest in various sorts of cavities, taking about a week to build. Nest cavities are usually a few meters above ground at most, but occasionally on cliffs as high up as 15 meters and more at least in southern populationsVerify source|date=February 2008 ; they may be natural or man-made, often using bird houses where they are available, and sometimes choosing unusual sites such as old shoesFact|date=February 2008.

House Wrens are feisty and pugnacious animals considering their tiny size. They are known to occasionally destroy the eggs of other birds nesting in their territory by breaking the eggshell. They are also known to fill up other birds' nests within its territory with sticks to make them unusable.

The House Wrens' clutch is three to six red-blotched cream-white eggs, weighing about 1.4 grams each and measuring c.17 and 13.4 mm at the widest points. Only the female incubates these, for around 14-16Fact|date=February 2008 days, and she will every now and then leave the nest for various reasons. When on the nest, the male provisions her with food. The young, which like all s hatch almost naked and helpless, take another 15-19 days or so to Fact|date=February 2008 . They are being fed by both parents, and need plenty of food given their tiny size (see also ). As the young near fledging, the parents spend much of their time procuring food for them. Brood loss due to predation was found to be light in the Southern Andean , with predation of nestling young being almost insignificant.

Migrant populations are nesting within 6 weeks of returning from winter quarters, leaving theoretically time for a second brood [Henninger (1906), OOS (2004)] . In the of northwestern Argentina and similar habitat, the Southern House Wren breeds in the rainy summer months from late October to late December.

The House Wren may have been displaced somewhat in some northern parts of its range by the introduction of the , but is still common and widespread throughout most of the . It is not considered threatened by the , though this would certainly not hold true for several of the island population if they turn out to be good species.

As remarked above, these are variously placed in "T. musculus" if that is considered distinct, or as one or several distinct species.

Its diminutive size and seemingly overconfident and bold behavior make the House Wren a well-liked bird to many Americans. House Wrens can be encouraged to nest in gardens in their range by offering nest boxes with hole small enough to prevent competitive cavity nesters.

, a protagonist of the PBS children's educational program "", had a wooden wren upon a stick that he often played with as a cherished toy. This bird was referred to as House Wren when the King composed and sang a song about his toy, mentioning the scientific name "Troglodytes aedon".