Boa manditra (also known as the Malagasy tree boa,[2] or Madagascar tree boa) is a non-venomous boa species endemic to the island of Madagascar. The specific epithet is also the Malagasy common name for this snake. No subspecies are currently recognized.[3] 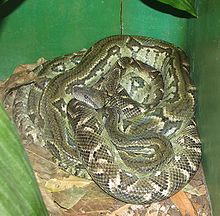 Adults average 4–5 feet (122–152 cm) in length, although 6–7 foot (183–213 cm) specimens are not uncommon. Thermoreceptive pits are located between the labial scales.[2] Females are larger than males.

There are two color variations that are considered by some to represent two distinct subspecies. One is green to grayish-green and is found mainly in the eastern half of the range, while the other is yellow, orange and brown and occurs in some parts of the western side of the range. The green variant also tends to be about two thirds of the size of the yellow-brown variant.

Endemic to Madagascar. The type locality given is "Madagascar."[1]

Favors trees and shrubs near streams, rivers, ponds and swamps.[2]

This species is classified as Vulnerable (VU) on the IUCN Red List of Threatened Species with the following criteria: A1cd (v2.3, 1994).[4] This means that a population reduction of at least 20% has been observed, estimated, inferred or suspected over the last 10 years or three generations, whichever is the longer, based on a decline in area of occupancy, extent of occurrence and/or quality of habitat, and based on actual or potential levels of exploitation. Year assessed: 2006.[5]

Also listed as CITES Appendix I, which means that it is threatened with extinction and CITES prohibits international trade except when the purpose of the import is not commercial, for example for scientific research.[6]

Arboreal and generally nocturnal, it feeds on bats and birds. Its thermoreceptive pits help it to locate its prey. It will also leave the trees to actively hunt for small mammals on the ground.[2]

When females become gravid, their skin color darkens. This adaptation provides increased heat absorption for the developing young. After giving birth, the color returns normal as soon as it next sheds its skin. Neonates are a bright red that may warn predators to "stay away", while simultaneously providing camouflage among brightly colored treetop flowers.

However, it was later found that the Malagasy boids and Boa constrictor do not form a monophyletic group, so that the lumping of Sanzinia, Acrantophis and Boa were probably in error, and most recent authors have reverted to the use of Sanzinia madagascariensis as the name for this species.[7][8]