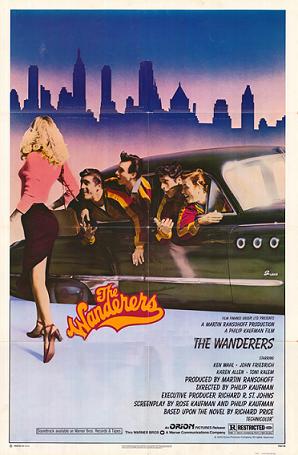 It tells the story of several youths growing up together amid the various of 1963 . The film stars , features and was directed by . In an interview for "American Film" in November 1983, Kaufman (who ran with a gang whilst growing up in Chicago in the 1950s) said he "had been wanting to do a gang movie for years - the urban experience, the darker side of teenagers growing up." Kaufman and his wife Rose wrote the screenplay, making a more cohesive story out of Price's episodic novel. Years later, Kaufman said, "I think Richard Price would say that his novel was really a bunch of short stories, and we really tried to make one story out of them all." [ [http://thehollywoodinterview.blogspot.com/2008/03/philip-kaufman-hollywood-interview.html] ] The Kaufmans also swapped characteristics between the individual Wanderers in the transition from novel to film. For instance, in the book it is Wanderer Buddy Borsalino who marries Despie Galasso; in the movie, protagonist Richie who marries Despie, and Buddy is relegated to a supporting role in the story. Also, in the book, one of the major characters is a Wanderer named Eugene, who doesn't appear in the movie at all.

The film centres around the members of a North Bronx , the Wanderers, and their fights with other gangs, and as well as gang rivalry, it deals with issues such as racial tensions, sex, growing up, loyalty, the good and bad points of machismo and brotherhood, and the reflection of youth rebellion in the music of the era. The film's two main protagonists are Richie Gennaro (), leader of the Wanderers, who has to deal with the imminent responsibilities of marriage, fatherhood, and joining his mobster father-in-law's family business; and Joey Capra (John Friedrich), who has a violent streak, artistic aspirations, and an unhappy home life (he hates and fears his brutal father).

In his book "Cult Movies III", notes that "many critics who loved the book would later accuse Kaufman of doing the novel a disservice...But Price would disagree: "I love that picture. It's not my book, and I don't care. The spirit is right, and the way Phil Kaufman directed it showed me another way of looking at my own book."" [Danny Peary, "Cult Movies III: 50 More Hits of the Reel Thing", (Great Britain: Sidgwick & Jackson, 1989) p.266.]

Although it was not a success upon its theatrical release, "The Wanderers" gained popularity and cult status over the years because of its sensitive depiction of teenagers coming of age. The gangs named in the movie, though fictionalized, are based on real gangs encountered by Price in his childhood, growing up in a housing project in the Bronx. Real names of actual Bronx gangs of the era -- the , the , the -- are used. "The Wanderers" was the name of an actual gang located in that was part of the larger gang. The movie depicts the end of a more innocent time, reflected by the violent death of Turkey (a former Wanderer), the recruitment of the Fordham Baldies into the Marines (a subtle foreshadowing of the ), the , the imminent marriage and domestication of Wanderers leader Richie, the departure of Wanderers Joey and Perry (who drive off to California), and a scene depicting then-rising folk singer in performing his song "". Kaufman later said, "When I was shooting "Goldstein", we came out on the street one day and I saw people were staggering down the street crying. We were walking around with our cameras and saw a bunch of people standing around a store window, looking in and crying. That was how I found out that JFK had been killed. We duplicated that in "The Wanderers" with the people looking in the department store window at all the TVs, watching the news that had been assassinated. I love that moment when Richie sees this transition happen and he decides to go back to the old neighborhood and stay in the old world, instead of going to see Bob Dylan with the Karen Allen character and joining the new world." [ [http://thehollywoodinterview.blogspot.com/2008/03/philip-kaufman-hollywood-interview.html] ]

*The Wanderers: An all-Italian gang comprising 27 members. They wear bright yellow/brown jackets and . Their leader, Richie, is dating Despie Galasso, the daughter of an infamous mobster, so The Wanderers have connections.

*The Fordham Baldies: As their name suggests, they are all , reportedly to prevent their hair from getting in their eyes during a fight. There are 40 of them, and each member is a serious brawler. Their leader is Terror, a 6'8", 400-pound monster of a man. They wear leather jackets with a skull on the back and "FB" (Fordham Baldies) on the arm.

*The Del Bombers: They are the toughest all-black gang in the Bronx. They have 23 members, and are prejudiced against Italians. They wear purple and gold hoodies with "DB" written in lettering on the back. Their leader is Clinton Stitch.

*Ducky Boys: They are an all-Irish gang. They have several distinctive things about them: none of them wears gang "colors". They are also the largest gang of the Bronx, with 500 members. They have a twisted take on - it is all right to kill and beat up people, as long as they attend mass and . They are the only gang willing to kill people. They all have crucifix tattoos on their arms and chest.

*The Wongs: As their name suggests, they are all Chinese, and have the last name "Wong". There are 27 members, and every single one of them knows . Their leader is Teddy Wong. They wear black hoodies with a (Chinese character) on the back. They all appear to be quite stealthy as during a meeting in an open field they appear to vanish as the Wanderers momentarily turn their heads. Their motto is "Don't Fuck with the Wongs". They help the Wanderers and Del Bombers fight the Ducky Boys during a gang rumble. They all have dragon tattoos.