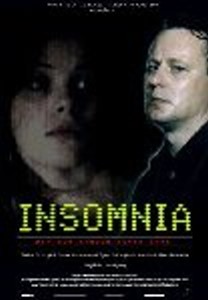 "Insomnia" is a Norwegian film about a police detective investigating a murder in a town located above the . The detective arrives in the summer, during the , and suffers from . It was the film debut of director . The screenplay is by , and the soundtrack by (alias Biosphere).

"Insomnia" tells the story of a cross-border collaboration between Swedish and Norwegian police to hunt down the killer of a fifteen-year-old girl in the city of far up in the Norwegian Arctic. The investigation goes horribly wrong when police officer Jonas Engström () mistakenly shoots his partner () and subsequently attempts to cover up his bungle. The title of the film refers to Engström's inability to sleep, the result of both his guilt and the relentless glare of the midnight sun.

In the film, Engström is unable to sleep, partly due to relentless over recent and ongoing misdeeds, and partly due to the never-ending sunlight, which serves as an outward representation of that guilt. The film has been described as turning "" conventions on their heads by using, in place of shadows and darkness, relentless sunshine and ubiquitous bright white fog to convey guilt and disorientation. The film noir theme is emphasized, as the film follows many of the other conventions from this genre. For instance the lone detective that doesn't follow rules, but develops a personal interest in the case and establishes connections with the villain.

In , a U.S. remake was released, directed by and starring and .