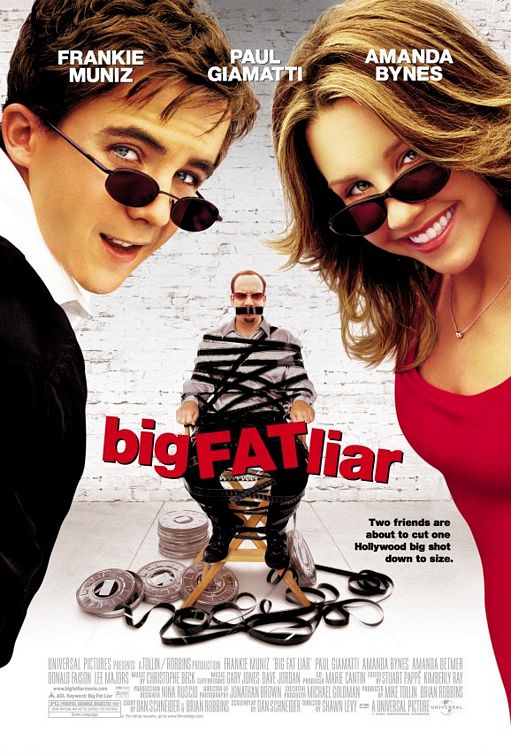 Jason Shephard (), a --old boy residing in the fictional town of Greenbury, , is known as a profuse but disorganized liar by his s and . When his English teacher, Ms. Phyllis Caldwell (), assigns her class a essay, Jason does not complete it. His parents are called into school where Ms. Caldwell tells Jason that if he can submit an original, handwritten essay at the community by 6:00, she will consider counting it as a valid contribution.

Jason, therefore, writes a story entitled "Big Fat Liar". Riding his sister's old bike, he is distracted and collides with the limousine of arrogant Hollywood producer Marty Wolf (). Having been confronted by the driver, Jason blackmails Wolf into giving him a ride to the college. When the limo reaches the college, Jason hastens into it, not realizing that he has forgotten his essay.

Upon his entering the community college, he realizes that he does not have the essay. Neither his parents nor Ms. Caldwell believe him when he claims to have written it. After a day at summer school, Jason and his friend Kaylee () visit a cinema, where Jason learns that Marty Wolf has plagiarized Jason's composition by making a film of "Big Fat Liar".

When his parents and elder sister have left him alone for a few days, Jason and Kaylee use Jason's savings to fly to , to confront Wolf, leaving a local bully to attend Kaylee's absent-minded grandmother. At the studio, Jason tricks the receptionist into leaving her post to allow Jason to speak with Wolf. Kaylee takes the receptionist's place while Jason sneaks upstairs to confront the producer. Wolf returns the essay, but (seemingly by mistake, though in fact deliberately) lights it on with a match used to light his cigar. Wolf then exacerbates the fire by pouring onto it. With his position secure, Wolf orders Jason ejected from the building.

Jason thereafter makes plans to make Wolf's life miserable, so that he will admit to having stolen "BFL". Some of the attempts include adding -ed to Wolf's swimming pool so that his is turned blue, adding (with similar effects) orange dye to his shampoo, and reorganizing the controls of Wolf's Jaguar XKR to perform different functions than expected. Distracted by his malfunctioning car, Wolf mistakenly collides with a driven by an easily angered prizefighter, who takes revenge by smashing Marty's car.

Meanwhile, Marty has an appointment to meet with Marcus Duncan (), the President of the studio, to talk about funds for the production of "BFL". Marty misses the meeting, having been tricked by Kaylee into visiting the birthday party of a child whose preferred form of amusement is beating his entertainers. He tells his overworked assistant Monty to supply an . Marty later meets Duncan at a party celebrating the release of his film "Whittaker and Fowl", which proves to be a box office failure. Duncan, as a result of that failure, distrusts Marty to create anything better and tells Marty that all the fundings for "Big Fat Liar" will be withdrawn unless he can convince him otherwise. Marty lies, telling him that he (Marty) has been working to make a presentation for "BFL"; therefore Marty is given another chance to produce an acceptable film. As Wolf worried for his presentation (for which he has not planned), Jason arrives and agrees to help Wolf in exchange for a confession of the truth to Jason's father. Marty, guided by Jason, makes a successful presentation, but rather than fulfill his promise orders Jason and Kaylee deported.

Jason, furious, is about to give up when Monty appears and states that because many of Marty's co-workers and employees (including Monty herself) have been openly abused, they are willing to take on Marty. Together, the children and film crew devise a plan by which to keep Marty from making the "big shoot". By now, Marty has removed or covered the blue color on his skin.

"En route" to the studio Marty falls into several traps organized by his former co-workers. Upon finally arriving to the studio, bedraggled and desperate, he finds that Jason has taken Marty's prized toy chimpanzee hostage. He pursues Jason, and in a climactic rooftop confrontation admits to stealing Jason's story, thinking them to be alone. Immediately, it is revealed that he has been under video surveillance throughout the confession; as a result, he is exposed and shamed before all those whom he has abused, Jason's parents, and studio President Marcus Duncan himself. Duncan is outraged at Marty for his act of plagiarism and fires him, while Jason's parents re-establish their trust in Jason. Jason thanks Marty for having taught him that "The truth" (as he tells Marty, in a reverse of Marty's own advice) "is "not" overrated". The film "Big Fat Liar" is re-produced and shown at the movies, utilizing the hitherto underappreciated talents and skills of all those whom Marty had abused. Jason is credited for having written the original story.

Later, the unemployed Marty finds a job as a , in which role he is assigned to entertain the son of the prizefighter whom he insulted. Recognizing him, the father orders his son to utilize newly-learned prizefighting techniques as a means of avenging the earlier offence.

The film received mixed reviews, gaining a "Rotten" rating at of 44%. [ [http://www.rottentomatoes.com/m/1112545-big_fat_liar/ Big Fat Liar Movie Reviews, Pictures - Rotten Tomatoes ] ] Some critics praised the film for its energy and wit; others wrote of its dullness and formulaic plot. Nevertheless, the film grossed $47 million at the box office.