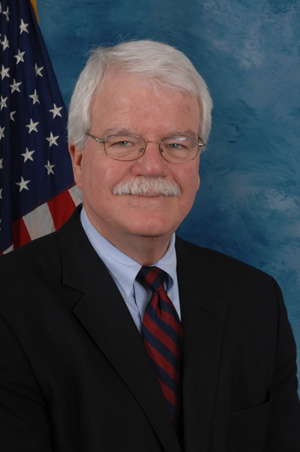 George Miller III (born ) is an American politician who has been a Democratic member of the since 1975, representing ushr|California|7 ( [http://nationalatlas.gov/printable/images/preview/congdist/ca07_109.gifmap] ).

The son of State Senator George Miller, Jr., he was born in . He was educated at and the law school, after which he was admitted as an and served as legislative assistant to majority leader before entering the House. Since 2007, Miller has served as chairman of the Education and Labor Committee, formerly known as the Education and the Workforce Committee.

In the House, Miller has been a member of the Natural Resources Committee; he was that Committee's chairman from 1991 to 1994. Miller has supported efforts to preserve public lands such as the 1994 California Desert Protection Act, which among other things created and . In addition, Miller was the chief sponsor of the Central Valley Project Improvement Act of 1992, which mandated that the federal government's manage the in order to better protect the fish and wildlife populations of California's Bay-Delta region. [ [http://www.usbr.gov/mp/cvpia/index.html Reclamation MP Region CVPIA homepage ] ] Miller lost his chairmanship when Republicans won control of Congress in 1994. He stayed as the committee's Ranking Member until 2000, and remains on the committee. Miller is also a member of the .

From 2001 to 2006, Miller was the ranking Democrat on the Education and the Workforce Committee. With that committee's chairman, and their Senate counterparts, Miller helped draft the education law in 2001 and 2002. Miller has focused on issues, reinstating wage protections for workers in the wake of . In addition, Miller has worked on education issues such as protesting student aid cuts, [ [http://www.sfgate.com/cgi-bin/article.cgi?f=/c/a/2005/11/27/MNGDSFTI2B1.DTL&feed=rss.news Groups gird to battle Congress' proposed student aid cuts ] ] , increasing funding, and investigating the Bush administration's hiring of to promote that law. Miller has also been a vocal advocate of labor and in the Commonwealth of the Northern Mariana Islands. [ [http://www.house.gov/georgemiller/marianas.html Information from Congressman George Miller on the Northern Marianas Islands ] ] . In 2007, as chairman of the House Education and Labor Committee, Miller sponsored the , which was enacted into law as an amendment to another bill.

Miller has petitioned to clear the names of the sailors of the in which more than 200 black men were ed and 50 convicted of for refusing to continue to load ammunition onto warships after a tremendous explosion killed hundreds. For the most part, Miller's efforts failed, and fewer than four of the sailors convicted of mutiny are still alive. However, in 1999, during a flurry of s signed as he left office, pardoned , one of the 50 "mutineers". [ [http://www.cccoe.k12.ca.us/pc/the_pardon.htm Port Chicago Disaster - The Pardon ] ] In addition, Miller wrote the legislation to designate the site of the event as a National Memorial. [ [http://www.house.gov/georgemiller/ptchicmain.html Congressman Miller's Port Chicago Page ] ] [ [http://www.cr.nps.gov/nr/travel/wwIIbayarea/por.htm Port Chicago Naval Magazine National Memorial: World War II in the San Francisco Bay Area: A National Register of Historic Places Travel Itinerary ] ]

Miller recently went on a bipartisan trip to the region of where there is an ongoing . He advocates for U.N. intervention into the situation. [ cite web|url=http://www.house.gov/georgemiller/sudanop-ed.html |title=In Darfur, Need to Act is Urgent |accessdate=2007-01-29 |last=Miller |first=George ]

Miller is a supporter of . In 2000, as ranking member of the House Resource Committee, Miller inserted an amendment to the Omnibus Indian Advancement Act that took an existing cardroom into federal trust for the . The amendment made the land acquisition retroactive to 1987, stating that " [s] uch land shall be deemed to have been held in trust and part of the reservation of the Rancheria prior to October 17, 1988." [http://frwebgate.access.gpo.gov/cgi-bin/getdoc.cgi?dbname=106_cong_public_laws&docid=f:publ568.106] . This allowed the Lyttons to open a casino at the cardroom under the terms of the of 1988. Some members of Congress and the gambling industry have called the amendment "underhanded," while other politicians have called the maneuver nothing out of the ordinary [https://san.secure.newtimes.com/issues/2001-06-06/news/feature_5.html] .

Miller is a in the Democratic Party's 2008 presidential primary. He has pledged support for , despite the fact that his district voted for . Miller cited Obama's fundraising campaign, first-place win the and strong showing in the , leadership style and opposition to the as reasons for his endorsement. The endorsement was first reported in the "Contra Costa Times" on January 9, 2007. [ [http://www.contracostatimes.com/ci_7924179?source=most_emailed&nclick_check=1 George Miller endorses Obama - ContraCostaTimes.com ] ]