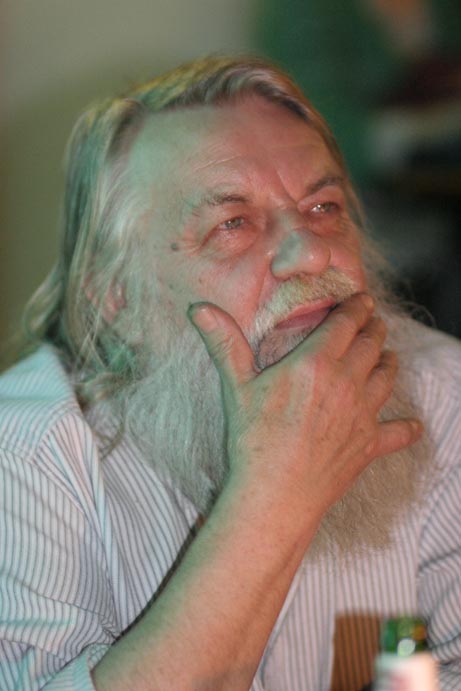 Robert Wyatt (born Robert Wyatt-Ellidge, 28 January 1945, in ) is an English , and founding member of the influential band .

As a teenager, he lived with his parents in near . Here he was taught the drums by visiting American drummer .

In 1962, Wyatt and Neidorf moved to where they stayed near the poet . The following year, Wyatt returned to England and joined the with and . Allen subsequently left for and Wyatt and Hopper formed with , and . Wyatt was initially the drummer in the Wilde Flowers, but following the departure of Ayers, he also became lead singer.

In 1966, the Wilde Flowers disintegrated, and Wyatt and Mike Ratledge formed the with and . Here Wyatt both drummed and sang, an unusual combination for a stage rock band.

In 1970, after chaotic touring, three albums and increasing internal conflicts in Soft Machine, Wyatt released his first solo album, "", which combined his vocal and multi-instrumental talents with tape effects.

A year later, Wyatt left Soft Machine and, besides participating in the fusion bigband Centipede and drumming at the 's New Violin Summit, a live concert with violinists , , and Nipso Brantner, guitarist , keyboardist and bassist Neville Whitehead [Allmusicguide|id=10:jzfyxq85ldte|label=New Violin Summit] , formed his own band (a pun on "machine molle", French for 'Soft Machine'), a largely instrumental outfit. After two albums and a split, Matching Mole were about to embark on a third record when, on 1 June 1973, during an alcohol fueled party for Gong's and June Campbell Cramer (also known as ) at the latter's Maida Vale home, an inebriated Wyatt fell from a third floor window. He was paralysed from the waist down and subsequently confined to a . On 4 November that year, performed two benefit concerts, in one day, at 's Rainbow Theatre, supported by Soft Machine, and compered by . The concerts raised a reported £10,000 for Wyatt.

The injury led Wyatt to abandon the Matching Mole project, and his drumming. He promptly embarked on a solo-career, and with musician friends (including , the poet and guitarist ), he released his acclaimed solo-album "Rock Bottom". Later that same year he put out a single, a of "", which hit number 29 in the UK chart. Both were produced by Pink Floyd drummer and Wyatt would subsequently sing lead vocals on Mason's 1981, and first, solo album "" (with songwriting credits going to ). There were strong arguments with the producer of "" surrounding Wyatt's performance of "I'm a Believer," on the grounds that his wheelchair-bound appearance 'was not suitable for family viewing', the producer wanting Wyatt to appear on a normal chair. Wyatt won the day and 'lost his rag but not the wheel chair', but gave a performance that could best be described as disgruntled.

His follow-up single, a reggae ballad remake of Chris Andrews's hit "" was nearly released by Virgin, but at the last minute it was shelved due to "the boss at Virgin claiming that single was 'lugubrious', robbing Wyatt of a possible follow-up hit". [Quote taken from the liner notes of Wyatt's "EPs" boxset.]

Wyatt's next solo-album, "", was more jazz-led, with influences and nods to . Guest musicians included on guitar, synthesizer and "direct inject anti-jazz ray gun".

Throughout the rest of the 1970s, Wyatt guested with various acts, including (documented on their "" album), , , , and guitarist , contributing lead vocals to lead track "Frontera", from Manzanera's 1975 solo debut "Diamond Head". His solo work during the early 1980s was increasingly politicised, and Wyatt became a member of the . In 1982, his interpretation of 's -inspired song "Shipbuilding", the last in a series of political cover-versions (collected as ""), reached number 36 in the UK singles chart.

In the late 1980s, after collaborations with other acts such as as well as Japanese recording artist , he and his wife spent a sabbatical in , before returning in 1991 with a comeback album "Dondestan", considered by many to be his best work since "Rock Bottom". His 1997 album "" was also highly acclaimed.

In 1999 he collaborated with the Italian singer on her second album "". In the summer of 2000 her first EP "" was released and Wyatt made an appearance in the video of the title track.

Wyatt contributed the haunting "Masters of the Field", as well as "The Highest Gander", "La Forêt Rouge" and "Hors Champ" to the soundtrack of the acclaimed 2001 film "Winged Migration". He can be seen in the DVD's Special Features section, and is praised by the film's composer as being a big influence in his younger days.

Influence on other artists

The song "I Believe" from "" (1985) is reportedly dedicated to Wyatt; the video features sitting shirtless in an arm chair for most of the video to mimic Wyatt's paralysis. As a further tribute to Wyatt, on the b-side of the single, Orzabal performs a cover version of "", one of his most loved songs from the "Rock Bottom" album. This recording can also be found on the "" compilation CD "" as well as later remastered versions of "Songs from the Big Chair".

In June 2001, Wyatt was curator of the Meltdown festival, and sang "" during David Gilmour's performance at the festival, recorded on Gilmour's DVD "".

In January 2003 broadcast a programme entitled "Free Will and Testament" which featured performance footage of Wyatt with other musicians including Ian Maidman and Liam Genocky, together with interviews with John Peel, Brian Eno, Annie Whitehead, Alfie and Robert Wyatt himself. [ [http://www.bbc.co.uk/bbcfour/music/features/robert-wyatt.shtml Free Will and Testament] , BBC Four]

In 2004, Wyatt collaborated with on the song "Submarine" which was released on her fifth album "Medúlla".

:"He lives in Louth, Lincolnshire and he has equipment in his bedroom where he records himself and his albums. We brought a G4 and and recorded it in like one afternoon. He's such an extraordinary singer. Before he left, he insisted to give us a scale of his voice, where he sings all the tones – and he has the most amazing range, like 5 or 6 s. What's really interesting about his range is that each octave is of a totally different character. We actually ended up using that later for "Oceania", we used what he calls the 'Wyattron'." — Björk, 25 August 2004

In 2006, Wyatt played with on Gilmour's new release "", singing and playing cornet and percussion on "Then I Close My Eyes." Wyatt performed as a guest at Gilmour's series of Royal Albert Hall concerts, playing his cornet solo for this song. This is documented on the "" and , released in 2007. Wyatt also read passages from the novels of for Max Richter's album "Songs from Before".

In March 2007, it was announced that Wyatt was working on a new solo album entitled "". It was released in October 2007 on the label, a large independent label housing such big indie stars as , Pavement, and .

Recently the verb "Wyatting", named obviously after Robert Wyatt, appeared in some blogs and music magazines to describe the practice of playing weird tracks on a pub jukebox to annoy the other pub goers. The name was coined by Carl Neville, a 36-year-old English teacher from London, because one of the favourite LPs for this effect is "Dondestan".