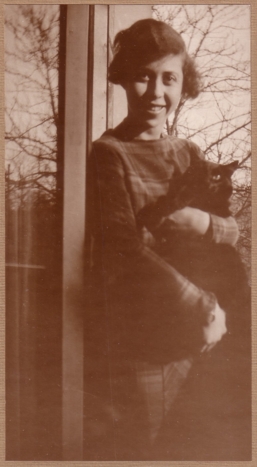 Irène Némirovsky was the daughter of a banker from , Léon Némirovsky. Her volatile and unhappy relationship with her mother became the heart of many of her novels. [ [http://www.iht.com/articles/2008/03/07/arts/IDLEDE8.php Early glimpses of Némirovsky's talent - International Herald Tribune ] ]

The Némirovsky family fled Moscow at the start of the Russian Revolution in 1917, spending a year in Finland in 1918 and then settling in , , where Irène attended the and started writing when she was 18 years old.

In 1929 she published "", the story of a Jewish banker unable to please his troubled daughter, which was an immediate success, and was adapted to the big screen by in 1930, with as David Golder. In 1930 her novel "Le Bal", the story of a mistreated daughter and the revenge of a teenager, became a play and a movie.

The "David Golder" manuscript was sent by post to the "Grasset" publisher with a address and signed "Epstein". H. Muller, a reader for "Grasset" immediately tried to find the author but couldn't get hold of him/her. "Grasset" put an ad in the newspapers hoping to find the author, but the author was "busy": she was having her first child, Denise. When Irène finally showed up as the author of "David Golder", the unverified story is that the publisher was surprised that such a young woman was able to write such a powerful book.

Although she was widely recognized as a major author, by Jewish authors like and anti-semitic authors like alike, French citizenship was denied to the Némirovskys in 1938.

Irène Némirovsky was , but converted to in 1939 and wrote in "Candide" and "Gringoire", two anti-Semitic magazines—perhaps partly to hide the family's Jewish origins and thereby protect their children from growing anti-Semitic persecution.

By 1940, Némirovsky's husband was unable to continue working at the bank—and Irène's books could no longer be published—because of their Jewish ancestry. Upon the s' approach to , they fled with their two daughters to the village of (the Némirovskys initially sent them to live with their nanny's family in Burgundy while staying on in Paris themselves; they had already lost their Russian home and refused to lose their home in France), where Némirovsky was required to wear the .

On , , Irène Némirovsky (then 39) was arrested as a "stateless person of Jewish descent" by French police under the regulations of the German occupation. As she was being taken away, she told her daughters, "I am going on a journey now." She was brought to a convoy assembly camp at and on July 17 together with 928 other Jewish deportees transported to . Upon her arrival there two days later, her forearm was marked with an identification number. According to official papers at the time, she died a month later of typhus. Subsequent records revealled that Irène was actually gassed there by the Nazis.

Her husband was sent to Auschwitz shortly thereafter, and was immediately put to death in a gas chamber.

Némirovsky is now best known as the author of the unfinished "Suite française" (Denoël, France, 2004, ISBN 2207256456; translation by Sandra Smith, Knopf, 2006, ISBN 1400044731), two s portraying life in between , and , , the period during which the s occupied . These works are considered remarkable because they were written during the actual period itself, and yet are the product of considered reflection, rather than just a journal of events, as might be expected considering the personal turmoil experienced by the author at the time.

Némirovsky's oldest daughter, Denise, kept the notebook containing the manuscript for "Suite Française" for fifty years without reading it, thinking it was a journal or diary of her mother's, which would be too painful to read. In the late 1990s, however, she made arrangements to donate her mother's papers to a French archive and decided to examine the notebook first. Upon discovering what it contained, she instead had it published in France, where it became a in 2004.

The original manuscript has been given to the (IMEC), and the novel has won the —the first time the prize has been awarded posthumously.

Némirovsky's surviving notes sketch a general outline of a that was intended to include the two existing novellas, as well as three more to take place later during the war and at its end. She wrote that the rest of the work was "in limbo, and what limbo! It's really in the lap of the gods since it depends on what happens."

In a January 2006 interview with the BBC, her daughter, Denise, said, "For me, the greatest joy is knowing that the book is being read. It is an extraordinary feeling to have brought my mother back to life. It shows that the Nazis did not truly succeed in killing her. It is not vengeance, but it is a victory."

Several reviewers and commentators [ [http://www.nextbook.org/cultural/feature.html?id=414 Nextbook: Behind the Legend ] ] [ [http://books.guardian.co.uk/comment/story/0,,2018357,00.html Stuart Jeffries on Irène Némirovsky | World news | The Guardian ] ] have raised questions regarding Némirovsky's attitude toward Jews, her generally negative depiction of Jews in her writing and her use of anti-semitic publications in advancing her career. A review of her work published in "The New Republic" states:

Némirovsky was the very definition of a self-hating Jew. Does that sound too strong? Well, here is a Jewish writer who owed her success in France entre deux guerres in no small measure to her ability to pander to the forces of reaction, to the fascist right. Némirovsky's stories of corrupt Jews-- some of them even have hooked noses, no less!--appeared in right-wing periodicals and won her the friendship of her editors, many of whom held positions of power in extreme-right political circles. When the racial laws in 1940 and 1941 cut off her ability to publish, she turned to those connections to seek special favors for herself, and even went so far as to write a personal plea to Marshal Pétain. [ [http://www.tnr.com/story_print.html?id=1ed87cd1-0944-455f-9219-1fb5d1ff77be Scandale Française ] ]

"Fire in the Blood"

On September 21st, 2007 another novel by Némirovsky was published from surviving manuscripts. Irène gave some of the manuscript to her husband, Michel Epstein; the rest was in the suitcase entrusted to her daughter Denise. The two matched up to form her last work, "Fire in the Blood", a tale of country folk in the Burgundy village of Issy L'Eveque, based upon a village where Némirovsky and her family found temporary refuge whilst hiding from the Nazis.

Works published during the author's life