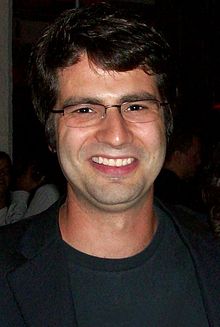 Edison Price "Ned" Vizzini (born April 4, 1981) is an American writer who is the author of books for young adults. He is best known for his novel Be More Chill. He has been a columnist for the New York Press since his teens.

Vizzini grew up primarily in the Park Slope neighborhood of Brooklyn in New York City. He attended Stuyvesant High School in Manhattan, graduating in 1999.[1] At fifteen he began to write articles for the New York Press, an alternative newspaper.

After he wrote an essay that was published by The New York Times Magazine, several of his essays about his young adult life ended up being combined into his first book, Teen Angst? Naaah.... Vizzini attended Hunter College, also located in Manhattan. Ned Vizzini currently lives in Los Angeles and continues to write and to speak about his books.[2] Vizzini's characters and situations are said to be based upon his time spent at Stuyvesant.[3]