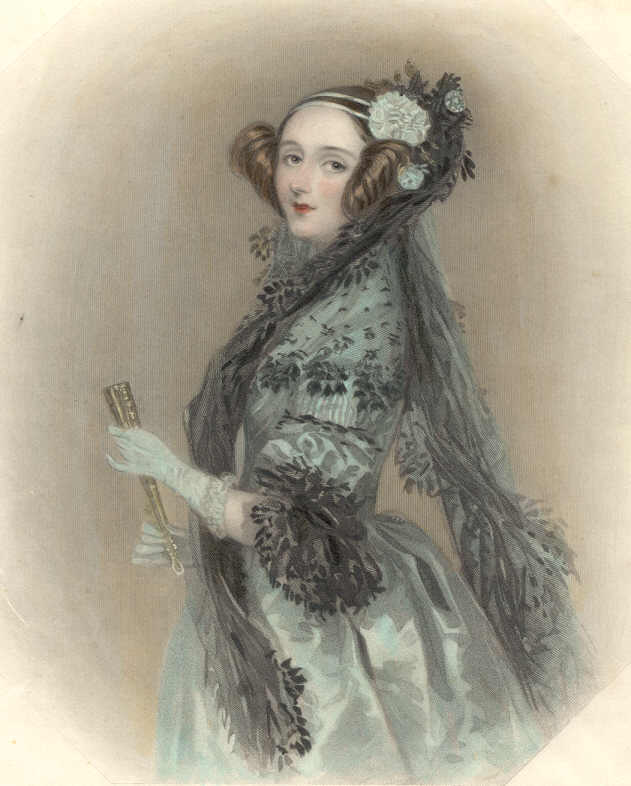 She is mainly known for having written a description of 's early mechanical general-purpose computer, the . She is today appreciated as the "first programmer" since she was writing programs—that is, manipulating symbols according to rules—for a machine that Babbage had not yet built. She also foresaw the capability of computers to go beyond mere calculating or number-crunching while others, including Babbage himself, focused only on these capabilities. [Fuegi and Francis 2003 pp. 19, 25.]

Lovelace, born 10 December 1815, was the only child of the poet Lord Byron and his wife, Annabella. [Stein, "Ada", pp. 14] Byron, and many of those who knew Byron, expected that the baby would be "the glorious boy", and there was some disappointment at the contrary news.

On 16 January 1816, Annabella, at Byron's behest, left for her parents home at Kirby Mallory taking one-month-old Ada with her. Although English law gave fathers full custody of their children in cases of separation, Byron made no attempt to claim his parental rights. [Stein, "Ada", pp. 16] On 21 April, Byron signed the Deed of Separation, although very reluctantly, and left England for good a few days later. [Turney 1972 p. 36–38]

Lovelace was often ill starting in her early childhood. At eight she experienced head aches that obscured her vision. [Stein, "Ada" p. 17] Later in 1824, Byron died, but he did not have a relationship with his daughter, as her mother was the only significant parental figure in her life.

Lovelace never met her younger half-sister, , daughter of Lord Byron and , who died at the age of five in 1822. Lovelace did have some contact with , the daughter of Byron's half-sister Augusta Leigh. However, Augusta purposely avoided Lovelace as much as possible when she was soon introduced at Court. [Turney 1972 p. 155] By 1834, Lovelace was a regular at Court and started attending various events. She danced often and was able to charm many people and was described by most people as being dainty. However, John Hobhouse, Lord Byron's friend, was the exception and he described her as "a large, coarse-skinned young woman but with something of my friend's features, particularly the mouth". [Turney 1972 pp. 138–139] This description followed their meeting on 24 February 1834 in which Lovelace made it clear to Hobhouse that she did not like him, which was probably the influence of her mother that taught her to dislike all of her father's friends; this impression of each other was not to last, and they later would become friends.

Lovelace's interest in mathematics dominated her life even after her marriage. Her obsession with rooting out any of the insanity of which she accused Lord Byron was one of the reasons that her mother taught Lovelace at an early age. Lovelace was privately home schooled in mathematics and by William Frend, William King and cn|date=July 2008. One of her later tutors was .

On 8 July 1835 she married William King, 8th Baron King, later 1st Earl of Lovelace in 1838. Her full name and title for most of her married life was "The Right Honourable Augusta Ada, Countess of Lovelace". Their residence was a large estate at Ockham Park, Surrey, along with another estate and a home in London. They had three children; Byron born 12 May 1836, Anne Isabella (called Annabella, later ) born 22 September 1837 and Ralph Gordon born 2 July 1839. Immediately after the birth of Annabella, Lovelace experienced "a tedious and suffering illness which took months to cure".

She knew Mary Somerville, noted researcher and scientific author of the 19th century, who introduced her in turn to Charles Babbage on 5 June 1833. Other acquaintances were Sir David Brewster, , and .

In 1841, Lovelace and Medora were told by Lovelace's mother that Byron was Medora Leigh's father. [Turney 1972 p. 159] Lovelace, 27 February 1841, wrote to her mother: "I am not in the least "astonished". In fact you merely "confirm" what I have for "years and years" felt scarcely a doubt about, but should have considered it most improper in me to hint to you that I in any way suspected". [Turney 1972 p. 160] However, Lovelace did not blame the incestuous relationship on Byron, but instead on Augusta Leigh: "I fear "she" is "more inherently" wicked than "he" ever was". [Moore 1961 p. 431] This did not stop Lovelace's mother from attempting to destroy her daughter's image of her father, but instead drove her to attacking Byron's image with greater intensity. [Turney 1972 p. 161]

During a nine-month period in 1842–1843, Lovelace translated Italian mathematician 's memoir on Babbage's newest proposed machine, the . With the article, she appended
a set of notes. [Menabrea 1843] The notes are longer than the memoir itself and include (Section G)in complete detail a method for calculating with the Engine, recognized by historians as the world's first . Biographers debate the extent of her original contributions, with some holding that the programs were written by Babbage himself. Babbage wrote the following on the subject, in his "Passages from the Life of a Philosopher" (1846): [(from an excerpt found in Perspectives on the Computer Revolution (1970), edited by Zenon Pylyshyn)]

Lovelace's prose also acknowledged some possibilities of the machine which Babbage never published, such as speculating that "the Engine might compose elaborate and scientific pieces of music of any degree of complexity or extent." [Fuegi and Francis 2003 quote 16]

She was buried next to the father she never knew at the Church of St. Mary Magdalene in , . Over one hundred years after her death, in 1953, Lovelace's notes on Babbage's Analytical Engine were republished after being forgotten. The engine has now been recognized as an early model for a computer and Lovelace's notes as a description of a and . [Fuegi and Francis 2003 pp. 16–26]

Some attribute to Lovelace a reputation for drinking, gambling and scandal, but it has been questioned whether any good evidence exists to support this or whether in fact "she led rather a dull life in comparison to other figures of her day". [Professor John Fuegi commenting on his review of Lovelace's correspondence: [http://www.bbc.co.uk/radio4/history/inourtime/inourtime_20080306.shtml BBC Radio 4 - "In Our Time - Ada Lovelace"] - streaming audio]

Lovelace met and corresponded with on many occasions, including socially and in relation to Babbage's and . Their relationship was not of a romantic nature.

Lovelace was one of the few people who fully understood Babbage's ideas and created a program for the Analytical Engine. Had the Analytical Engine ever actually been built, her program would have been able to calculate a sequence of s. Based on this work, Lovelace is now widely credited with being the first . [J. Fuegi and J. Francis, "Lovelace & Babbage and the creation of the 1843 'notes'." Annals of the History of Computing 25 #4 (Oct-Dec 2003): 16-26. [http://dx.doi.org/10.1109/MAHC.2003.1253887 Digital Object Identifier] ]

Babbage was impressed by Lovelace's intellect and writing skills. He called her "The Enchantress of Numbers". In 1843 he wrote of her:

:"Forget this world and all its troubles and if":"possible its multitudinous Charlatans - every thing":"in short but the Enchantress of Numbers." [Toole 1998 Acknowledgments]

The level of impact of Lovelace on Babbage's engines is the subject of debate. The debate is difficult to resolve due to Charles Babbage's tendency not to acknowledge (either verbally or in writing) the influence of other people in his work.

The computer language Ada, created by the , was named after Lovelace. The reference manual for the language was approved on 10 December 1980, The Department of Defense Military Standard for the language, "MIL-STD-1815" was given the number of the year of her birth. In addition Lovelace's image can be seen on the product authenticity stickers.Fact|date=May 2008 Since 1998, the has awarded a medal in her name [ [http://www.bcs.org/server.php?show=nav.5822 Lovelace Lecture & Medal : BCS] Accessed 2 March 2008] and in 2008 initiated an annual competition for women students of computer science. [ [http://www.comp.leeds.ac.uk/bcswomen Undergraduate Lovelace Colloquium, BCSWomen] Accessed 6 March 2008]

In popular media, Lovelace has been portrayed in the movie "" and the novel "" by William Gibson and Bruce Sterling.