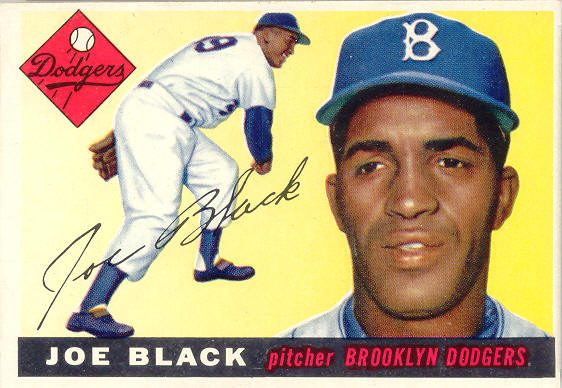 Joseph Black (, - , ) was an American right-handed in Negro League and for the Brooklyn Dodgers, Cincinnati Redlegs, and Washington Senators who became the first black pitcher to win a World Series game, in 1952. Black died of at age 78.

A native of Plainfield, , he starred at Plainfield High School. [Goldstein, Richard. [http://query.nytimes.com/gst/fullpage.html?res=9507EEDA1638F93BA25756C0A9649C8B63 " Joe Black, Pitching Pioneer for the Dodgers, Dies at 78"] , "", , . Accessed , . "Black was born in Plainfield, N.J., where he was an all-around athlete in high school."] [McKenzie, Doug. [http://ebs.gmnews.com/News/2001/0207/Sports/06.html "South River’s Pearson to be inducted to N.J. Hall of Fame"] , "East Brunswick Sentinel", , . Accessed , . "Also on this year’s list of inductees are Joe Black, a Plainfield High School graduate who became the first African-American pitcher to win a World Series game"] Black attended on a baseball scholarship and graduated from in 1950 and later received an honorary doctorate from . He was a member of fraternity, inc.

Black helped the of the Negro Leagues win 2 championships in 7 years. He and pushed for a pension plan for Negro League players and was instrumental in the inclusion of players who played before 1947. Black then played for a year in the Brooklyn Dodgers' minor league system.

Call up to Brooklyn

The Dodgers promoted Black to the major leagues in 1952, five years after teammate Jackie Robinson broke baseball's color barrier. Black was 28 when he reached the majors. He roomed with Jackie while with Brooklyn, and was dominant out of the bullpen, chosen Rookie of the Year after winning 15 games and saving 15 others for the National League champions. He had a 2.15 ERA but, with 142 innings pitched, fell 8 innings short of winning the ERA title.

Strapped for pitching, Dodgers manager brought Black out of the bullpen and started him 3 times in 7 days in the 1952 World Series against the New York Yankees. He won the opener with a 6-hitter over , 4-2, then lost the 4th game, 2-0, and the 7th, 4-2.

The next spring after the World Series, Dressen urged Black to add some pitches to his strong fastball and tight curve. He tried, but lost control of his two basic pitches in the process and didn't regain his dominance until 1955. After three more seasons with Brooklyn, Black drifted to Cincinnati and Washington and was out of baseball by 1958. In 6 seasons, he compiled a 30-12 record, half of his wins coming in his rookie season.

After his career ended, Black became an executive with Greyhound in .

In addition to lobbying for black players, he remained in baseball through his affiliation with the commissioner's office, where he consulted with players about career choices.

He was a board director of the and worked for the in community relations after they joined the NL in 1998. Black was a regular in the Diamondbacks' dugout during batting practice and in the press box. He also did a lot of charity work in the Phoenix area.

He wrote a syndicated column, "By The Way," for "Ebony" magazine and an autobiography, "Ain't Nobody Better Than You".

Black was interred in the Hillside Cemetery of .

"Joe Black was a tremendous human being," Arizona manager said. "He always had positive words for me. His parting words were always, `Make sure you do it your way.' He must have told me that a hundred times last year. "He was a diehard Diamondbacks fan. He loved this team and I'm just glad we had a chance to win a World Series for him."

"He was a Dodger, but he was a giant of a man," former NL president Len Coleman said. "He was the greatest friend, and his loss leaves the world a lot more empty."

"His legacy is the thought that unheralded players can rise to the heights, that someone who at the time was considered an ordinary athlete could wind up pitching Game 1 of the World Series," said , the Dodgers' play-by-play announcer since 1951.

"He loved the game and he loved to talk the game," said Montreal manager , who was friends with Black and visited him this month when the Expos were in Phoenix. "He was a great guy, a jolly guy, a real fun guy," said New York Yankees bench coach , a teammate with the Dodgers. "It's sad to lose him."