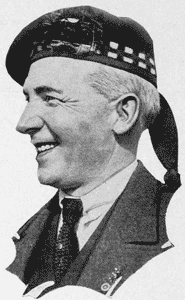 Henry Lauder was born at in the home of his maternal grandfather, Henry McLennan. His father was John Currie Lauder, descended from the Lauders of , and his mother was Isabella Urquhart MacLeod McLennan, born in to a family from the . At the time, his father was also living in Portobello.

John Lauder moved to in 1882 to take up a job designing china. After only a short time in residence there, he died of , and his widow Isabella moved to her brother's home in Arbroath with her five sons and two daughters. She was determined to continue Harry's education (it being then customary for children to find employment at the age of 11 or 12), and he worked part-time at the local mill until he was 16 in order to qualify to attend the school there.

On , Harry married Ann Vallance, the daughter of a manager at , attended by his brother Matthew as . A year later, Harry served as best man at Matthew's wedding to Ann's sister, Catherine.

Lauder is said to have first appeared in his music-hall career as an Irish comedian. He toured the world extensively during his forty-year career, including 22 trips to the and several to , to which his brother John had emigrated. He was, at one time, the highest-paid performer in the world, making the equivalent of £12,700 a night plus expenses, [cite news | work=The Sunday Times | title=Harry Lauder, coming to a ringtone near you | date=2005-07-24] and was the first British performer to sell more than a million records. Lauder's appeal was not limited to popular tastes; he was a favourite of King Edward VII and a friend of , the tea merchant.

When broke out, Lauder was in Melbourne on one of his Australian tours. During the war, he led successful fundraising efforts for war charities, organised a tour of s in 1915 for recruitment purposes, and entertained the troops under enemy fire in . He suffered personal tragedy during the war, when his only son, John (1891–1916), a captain in the 8th , was killed in action on at Poiziers. Harry wrote the song "Keep Right on to the End of the Road" in the wake of John's death, and would memorialize his son, who was buried in France, in the little Lauder cemetery in Glenbranter. For his services during the war, Lauder was knighted in January 1919.

Sir Harry wrote most of his own songs, favourites of which were "", "I Love a Lassie", "A Wee Deoch-an-Doris", and "Keep Right on to the End of the Road", which is used by as their club anthem.

Sir Harry's wife died on and was buried next to her son's memorial at 'Glenbranter', Argyll. His niece, Margaret (Greta) Lauder, M.B.E., (1900–1966), moved in with him at his home, 'Laudervale' (outside ), and would become his constant companion in later years.

Sir Harry's final retirement was announced in 1935. However, he again entertained troops during , despite his age, and made broadcasts with the . He also appeared immediately after the war to thank the crews of American food relief ships docking at . His last years were spent in his home of Lauder Ha' at , where he died in February 1950, aged 79.

As might be expected, his funeral was widely reported on. One of the chief mourners was the Duke of Hamilton, who led the funeral procession and read the lesson. Unexpectedly, Sir Harry was interred with his mother and brother George at Bent Cemetery, Hamilton, rather than at 'Glenbranter'.

The family held on to Lauder Hall until the late 1960s, when death duties forced its sale.

Sir Harry Lauder is frequently mentioned today in a wide variety of programmes, and the Scottish education authorities encourage Scottish dancing to some of his tunes.

When the A199 Portobello bypass was opened, it was named the "Sir Harry Lauder Road". [cite web | url=http://www.edinburgh.gov.uk/internet/Attachments/Internet/Transport/Motor_vehicles_roads_and_parking/Roads_and_highways/List_of_Public_Roads%20Q%20-%20Z%20(1Nov06).pdf | title=List of Public Roads Q - Z | accessdate=2007-08-30]

On the , The Rt. Hon. John McKay, CBE, hosted a luncheon at the Edinburgh City Chambers, to commemorate the 60th Anniversary of the granting of the Freedom of the City to Sir Harry Lauder, attended by family representative , who, on , formally opened the new Sir Harry Lauder Memorial Garden at Portobello Town Hall, [ "The Portobello Reporter", Autumn 2001 edition] and was the principal commentator throughout the Saltire/2 TV (Scotland) documentary entitled "Something About Harry" screened on . On , Lauder-Frost as guest-of-honour rededicated for another century the Burslem Golf Course & Club at , which had been formally opened on the same day in 1907 by Harry Lauder. [ "" (newspaper), Stoke-on-Trent, , p. 47 (includes photo).]

In the 1990s, samples of recordings of Lauder were used on two tracks recorded by the Scottish folk/dance music artist .

An ornamental cultivar of Common Hazel (Corylus avellana) has become known as Harry Lauder's Walking Stick or Corkscrew Hazel. It was noticed growing as part of a hedge in the 1800s & is now propagated by grafting. It gains this name from the fact Harry regularly appeared with a crooked walking stick.

For further reading see the various books by Sir Harry Lauder, including

* "The Sunday Times" (Scottish edition), 24 July 2005, article: "Harry Lauder, coming to a ringtone near you", by David Stenhouse.

* "A Minstrel in France", Hearst's International Book Company, London, 1918, by Harry Lauder about the death of his son.

* Sir Harry Lauder's, "Keep Right on to the End of the Road", has been adopted as 's anthem and is one of the most widely recognised football songs in the UK.