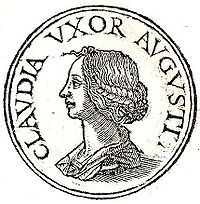 Clodia Pulchra, also known as Claudia (born 57 BC/56 BC) was the daughter of Fulvia by her first husband Publius Clodius Pulcher. She was the stepdaughter of Mark Antony and half-sister of Marcus Antonius Antyllus and Iullus Antonius.

Mark Antony was her mother's third husband. As Clodius had done previously, Antony was happy to accept her money to boost his career. Following Julius Caesar's assassination on March 15, 44 BC, Antony formed the second triumvirate with Octavian and Lepidus and embarked on a savage proscription. To solidify the political alliance, Fulvia offered Clodia to young Octavian as wife, while Lepidus offered his wife's niece Servilia. Subsequently, Octavian chose Clodia.

Not much is known about their marriage and little information survives about Clodia. These actions caused political and social unrest, but when Octavian asked for a divorce from Clodia, Fulvia herself decided to take action. Together with Lucius Antonius, her brother-in-law, she raised eight legions in Italy to fight for Antonius' rights against Octavian. The army occupied Rome for a short time, but eventually retreated to Perusia (modern Perugia). Octavian besieged Fulvia and Lucius Antonius in the winter of 41-40 BC, starving them into surrender. Fulvia was exiled to Sicyon, where she died of a sudden illness.

Octavian divorced Clodia to marry Scribonia, with whom he would have his only child, Julia the Elder. His marriage with Clodia was never consummated, he returned her to her mother with a letter informing her that he was returning her in "mint" condition.[1]