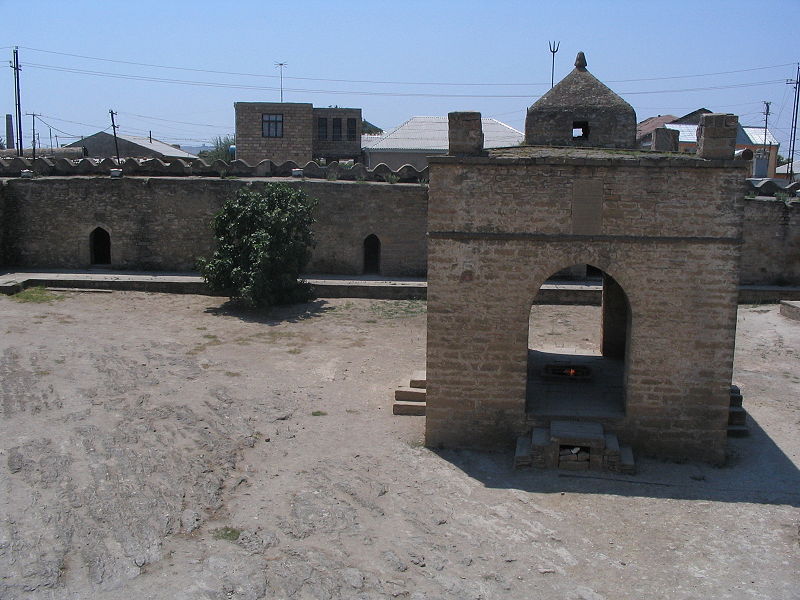 caption=Inner courtyard of the complex. Visible in the foreground - with a on the roof - is an stage. Along the wall in the background are the doorways of cells for monks.
creator =
proper_name = "Atashgah" or "Ateshgyakh"
date_built = 18th century
primary_deity = Jwalaji
location = , The Fire Temple of Baku, known locally as the Atashgah ("place of fire") or Ateshgyakh ("home of fire"), is a castle-like Hindu temple and monastery complex in near in . The complex is now a museum, and is no longer used as a place of worship. The fire was once fed by a natural gas vent.

Inscriptions in the temple in (in Nagari script) and Punjabi (in script) identify the sanctity as a place of Hindu and worship. These inscriptions date from "Samvat" 1725 to "Samvat" 1873, which though unambiguous references to the , cannot be precisely dated since there is more than one "Samvat" calendar. "Samvat" 1725 could thus be either "c." 1646 CE or "c." 1782 CE. However, "local records say that it was built by a prominent Hindu traders community living in Baku and its construction coincided with the fall of the dynasty of Shirwanshahs and annexation by following Russo-Iranian war [of 1722-1723] ."

Also according to Jackson, the oldest reference to the temple is in 's "Caspian Sea",

Several references from the late 18th century and early 19th century record the site being used as a Hindu temple at that time. 's "Reise durch Russland" (1771) is cited in Karl Eduard von Eichwald's "Reise in den Caucasus" (Stuttgart, 1834) where the naturalist Gmelin is said to have observed Yogi austerities being performed by devotees. Geologist Eichwald restricts himself to a mention of the worship of , , and .

"The Ateshgyakh Temple looks not unlike a regular town caravanserai - a kind of inn with a large central court, where caravans stopped for the night. As distinct from caravanserais, however, the temple has the altar in its center with tiny cells for the temple's attendants - Indian ascetics who devoted themselves to the cult of fire - and for pilgrims lining the walls."

The fire was once fed by a vent from a subterranean located directly beneath the complex, but heavy exploitation of the natural gas reserves in the area during rule resulted in the flame going out in . Today, the museum's fire is fed by mains gas piped in from Baku city. [citation|last=Elliot|first=Mark|title=Azerbaijan with Excursions to Georgia|edition=3rd|year=2004|page=153|location=Hindhead, UK|publisher=Trailblazer Publications.] [citation|last = Byrne| first = Ciar| title = Man-made wonders of the world under threat from war, want and tourism | publisher = The Independent| date = February 2, 2005| url = http://www.independent.co.uk/travel/news-and-advice/manmade-wonders-of-the-world-under-threat-from-war-want-and-tourism-483330.html.]

Local legend associates the temple at Surakhany with the s of , but this is presumably based on the general identification of any "place of fire" (the common meaning of "atashgah") as a Zoroastrian place of worship. While the word also exists in Zoroastrian vocabulary, it is a technical term that denotes the altar-like repository for a sacred wood-fire or for the protected innermost sanctum where that fire altar stands (but not of the greater building around it). The technical meaning derives from Middle Persian "gah" for "throne" or "bed".

In 1876, James Bryce visited the place, and remarked that the site was sponsored by the (i.e. Indian Zoroastrian) community of Bombay. [citation|last=Bryce|first=James|title=Transcaucasia and Ararat: Being Notes of a Vacation Tour in the Autumn Of 1876|location=London|publisher=Macmillan|year=1878.] In 1925, a Zoroastrian priest and academic travelled to Baku to determine if the temple had indeed been once a Zoroatrian place of worship. Until then (and again today), the site was visited by Zoroastrian pilgrims from India. In his "Travels Outside Bombay", Modi observed that "not just me but any Parsee who is a little familiar with our Hindu brethren's religion, their temples and their customs, after examining this building with its inscriptions, architecture, etc., would conclude that this is not a [Zoroastrian ] Atash Kadeh but is a Hindu Temple, whose s (priests) used to worship fire (Sanskrit: ).".