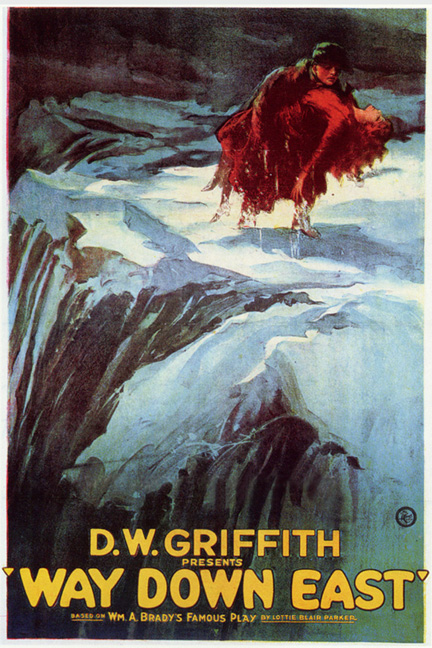 The rich, portrayed by Lennox (), are exceptionally selfish and think only of their own pleasure.

Anna is a poor country girl whom Lennox tricks into a fake wedding. When she is pregnant, he leaves her and she has the baby, named Trust Lennox, on her own.

When the baby dies she wanders until she gets a job with Squire Bartlett (Burr McIntosh). David (), Squire Bartlett's son, falls for her, but she rejects him due to her past and then Lennox shows up lusting for Kate. Seeing Anna, he tries to get her to leave, but she doesn't, and she tells no one about his past.

When Squire Bartlett learns of her past from Martha, the town gossip, he tosses Anna out in a snow storm. But before she goes, she fingers the respected Lennox, as the father of her dead baby and the spoiler of herself.

bought the film rights to the story, originally a stage play by Lottie Blair Parker. Performed in the late 1800s, it became one of the most popular plays in the . It toured successfully across the country for ten years, but was considered outdated by the time of its cinematic production in 1920. The play was an old-fashioned story that espoused eighteenth century Americana and Victorian ideals. [ [http://www.filmcritic.com/misc/emporium.nsf/reviews/Way-Down-East Brenner, Paul] . "FilmCritic," film review, 2007. Last accessed: .]

* as Anna Moore
* as David Bartlett
* as Lennox Sanderson
* Burr McIntosh as Squire Bartlett
* as Mother Bartlett
* as Kate, the Squire's niece
* as The Professor
* as Maria Poole, landlady
* Porter Strong as Seth Holcomb
* George Neville as The Constable
* Edgar Nelson as Hi Holler

When the film was screened in , film critic Mark Adamo reviewed the film and wrote, "What's astounding about the film is not that the rickety conventions of 1890s stage melodrama dog its every frame. (Even the film's seeming pioneering of feminism is hoary: the Leviticus-style titles would have us believe that Lillian Gish's tremulous ingenue fallen prey to a heavily mascaraed roue is 'the story of Woman.') What's amazing is that so much of Gish's tough, funny, intuitive performance, particularly in the film's middle section as she bears her illegitimate child, transcends time, place and technology. Equally amazing is Griffith's mighty striving, with his arty location shots, quirky close-ups and riskily staged set pieces, to forge a new and expressly cinematic style. The score, which William Frederick Peters and Louis Silvers stitched together from ragtime, popular songs and a little Liszt, seems baldly illustrative today: e.g., 'The Old Gray Mare (Ain't What She Used to Be)' pops up in the brass over footage of a stubborn dray. As an artifact of the years in which film music occupied an uneasy terrain between foreground and background functions -- sometimes substituting for drama, sometimes merely enhancing it -- it retains interest. Kudos to Anderson and her able musicians for performing nearly three hours' worth of unceasing music with but one intermission. 'Tristan' demands no less." [ [http://www.washingtonpost.com/wp-srv/style/longterm/movies/videos/waydowneastnradamo_a09dff.htm Adamo, Mark] . "," film review, . Last accessed: February 24, 2008.]

Film critic Paul Brenner wrote, "This hoary melodrama was Griffith's last big hit and, in fact, his biggest moneymaker since the epochal "", the film so much of a bonanza for Griffith that it kept his independent Mamaroneck studios running through the several lean years of box office failures that followed "Way Down East"...Many of Griffith's features suffer from sententious moralizing, a sense of God speaking to the masses, and outright racism. But "Way Down East" highlights the greatness of Griffith without having to sit through the or the "Ride of The Klan." "In Way Down East," Griffith's psychotic nuttiness, for once, didn't get in the way of a good film." [Brenner, Paul. Ibid.]

Critic Dennis Schwartz gave credit to actor Lillian Gish in his review, but dismissed the film entirely, writing, "Credit the strong emotional performances of the diminuitive Lillian Gish, the silent screen's shining star, as the wronged innocent country bumpkin with saving the day. Nevertheless, this old-fashioned bucolic soap opera doesn't translate well to modern-times. It's quintessential Griffith melodrama, a mix of opposing forces between those favoring Bible morality and the wealthy hedonists who mock God with their amorality, but the corn grows too high this time around and it has an irritating moralistic Bible flavor in supporting monogamy...The climax delivers a happy ending. It has the angry Squire Bartlett finding out about Anna's baby without a husband and he kicks the supposedly loose woman out in the middle of a winter blizzard. Anna's trapped on a slab of the river's ice floe heading over a waterfall, only to be rescued by a concerned David (it was shot during summer in a mill dam in ). The film's most exciting scene was made without any special effects, and is the only thing about the film worth remembering." [ [http://www.sover.net/~ozus/waydowneast.htm Schwartz, Dennis] . "Ozus' World Movie Reviews," . Last accessed: February 24, 2008.]

The review aggregator reported that 88% of critics gave the film a positive review, based on 8 reviews. [ [http://www.rottentomatoes.com/m/way_down_east/ "Way Down East"] at . Last accessed: .]