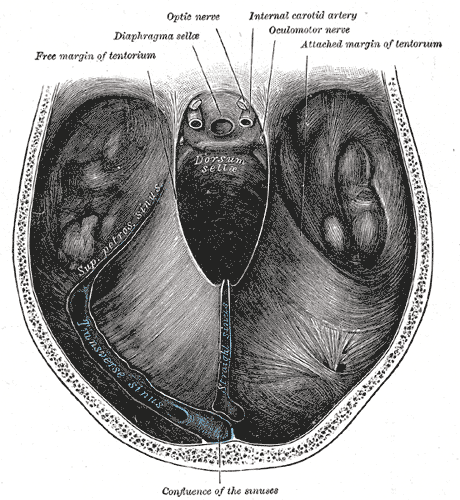 The transverse sinuses (left and right lateral sinuses), within a human head, are two areas beneath the brain, which allow blood veins to span the area, from the back of the head towards the nose. They drain from the and (along the top and back of the brain) to the (at the center of the head), at the . "See diagram (at right)": labeled under the brain as "SIN. TRANS." (for Latin: "sinus transversus").

The transverse sinuses are of large size and begin at the ; one, generally the right, being the direct continuation of the , the other of the .

Each transverse sinus passes lateralward and forward, describing a slight curve with its convexity upward, to the base of the of the , and lies, in this part of its course, in the attached margin of the ; it then leaves the tentorium and curves downward and medialward to reach the , where it ends in the .

The transverse sinuses are frequently of unequal size, with the one formed by the being the larger; they increase in size as they proceed, from back to center.

On transverse section, the horizontal portion exhibits a prismatic form, the curved portion has a semicylindrical form.

They receive the blood from the superior petrosal sinuses at the base of the petrous portion of the ; they communicate with the veins of the by means of the and s; and they receive some of the and s, and some veins from the .

The , when present, runs backward along the junction of the squama and petrous portion of the temporal, and opens into the transverse sinus.