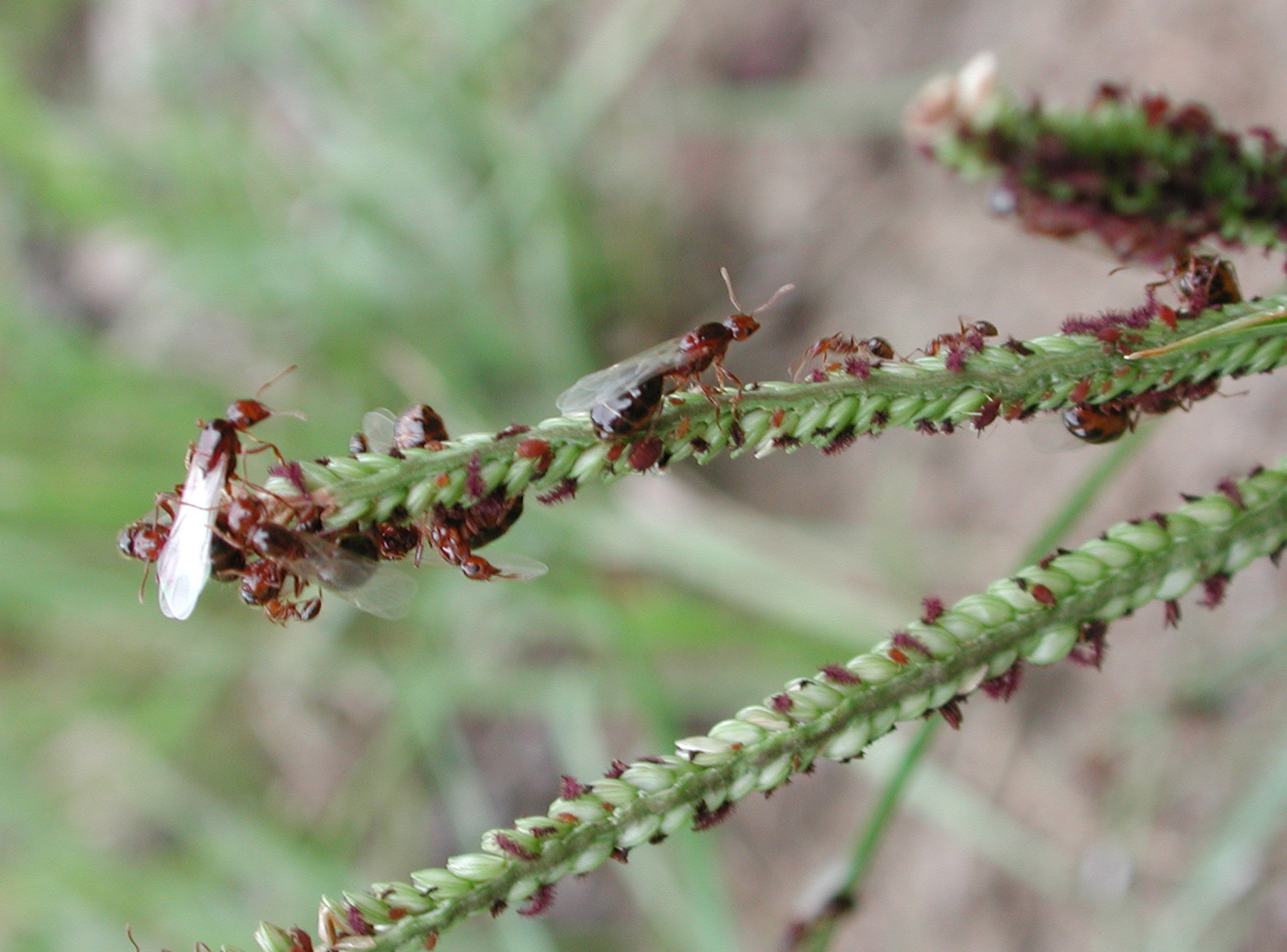 Fire ants, (referred to as red ants in the ), are stinging s with over 280 species worldwide. They have several common names including Ginger Ants and Tropical Fire Ants (English), aka-kami-ari (Japanese), and Feuerameise (German).

The bodies of fire ants, like all s' bodies, are broken up into three sections: the , the , and the , with three pairs of s and a pair of antennae. Fire ants can be distinguished from other ants by their copper brown head and body with a darker abdomen. The worker ants are blackish to reddish, and their size varies from 2mm to 6 mm (0.12 in to 0.24 in). These different sizes of the ants can all exist in the same nest.

A typical fire produces large mounds in open areas, and feeds mostly on young plants, seeds, and sometimes . Fire ants often attack small animals and can kill them. Unlike many other s, which bite and then spray on the wound, fire ants only bite to get a grip and then sting (from the abdomen) and inject a toxic called , a compound from the class of . For humans, this is a painful sting, a sensation similar to what one feels when burned by — hence the name fire ant — and the aftereffects of the sting can be deadly to sensitive individuals. Although fire ants do not typically seek out and attack the face, they are as likely to attack an exposed and vulnerable face as any other body part. The venom is both insecticidal and antibiotic. Researchers have proposed that nurse workers will spray their blood to protect them from microorganisms.

Fire ants nest in the soil, often near moist areas, such as s, edges, watered s and edges. Usually the nest will not be visible as it will be built under objects such as , logs, rocks, pavers, s, etc. If there is no cover for nesting, -shaped mounds will be constructed, but this is usually only found in open spaces such as fields, s and lawns. These mounds can reach heights of 40 cm (15.7 in).

Colonies are founded by small groups of queens or single queens. Even if only one queen survives, within a month or so the colony can expand to thousands of individuals. Some colonies may be polygynous (having multiple queens per nest) [ [http://www.bioone.org/perlserv/?request=get-document&issn=0015-4040&volume=086&issue=03&page=0381 Colonies in Florida dissected and observed with greater than 5 queens] ] .

A queen is generally the largest individual in the colony. The primary function of the queen is ; she may live for 6-7 years and produce up to 1,500 eggs per day. Many fire ant colonies will have more than one queen.

Mate with the queen ant in order to produce eggs.

The workers are sterile females who build and repair the nest, care for the young, defend the nest, and feed both young and adult ants.

Although most fire ant species do not bother people and are not invasive due to biological factors, "", commonly known as the Red imported fire ant (or RIFA) is an invasive pest in many areas of the world, notably the , , the , and . The RIFA was accidentally introduced into the United States due to a South American cargo ship coming to an Alabama port in 1918, but now infests the majority of the Southern and .

In the US, the FDA estimates that more than US$5 billion is spent annually on medical treatment, damage, and control in RIFA-infested areas. Furthermore, the ants cause approximately US$750 million in damage annually to agricultural assets, including bills and loss as well as crop loss. [cite journal | quotes=no |last=McDonald | first=Maggie | title=Reds Under Your Feet (interview with Robert Vander Meer) | journal= | volume=189 | issue=2538 | year=2006 | month=February | pages=50 | url=http://www.newscientist.com/channel/opinion/mg18925381.700-interview-extinguishing-red-fire-ants.html ] Since September 2004, has been seriously affected by the red fire ant.

The US, Taiwan and Australia all have ongoing national efforts to control or eradicate the species, but, other than Australia, none have been especially effective. In Australia an intensive program costing A$175 million has, at February 2007, eradicated 99% of fire ants from the sole infestation occurring in South East Queensland.

The venom of a fire ant sting causes stinging and swells into a bump. This can cause much pain and irritation at times, especially when stung repeatedly by several at once. The bump often forms into a white , which is at risk of becoming infected if scratched, however if left alone usually go down within a few days. The pustules are unattractive and uncomfortable while active and, if the sting sites become infected, can turn into s. Additionally, some people are allergic to the venom and, as with many allergies, may experience , which requires emergency treatment. [cite journal |author=deShazo RD, Butcher BT, Banks WA |title=Reactions to the stings of the imported fire ant |journal=N. Engl. J. Med. |volume=323 |issue=7 |pages=462–6 |year=1990 |pmid=2197555 |doi=] An or topical s may help reduce the itching.

Patients who experience severe or life threatening allergic reactions to fire ant insect stings should visit a doctor or hospital immediately upon contact as these reactions can result in death.

In Spanish, fire ants are known as "hormiga colorada/roja" (red ant) or "hormiga brava" (fierce ant). In there is a native, very small and slow-moving kind of fire ant called . In Portuguese, they are called "formiga de fogo" (fire ant) and "formiga lava-pé" (wash foot ant).