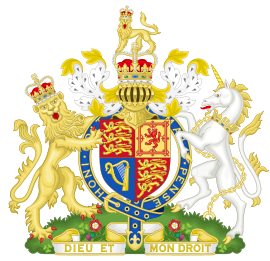 The motto appears on a scroll beneath the shield of the Royal coat of arms of the United Kingdom.

Dieu et mon droit is the motto of the British Monarch in England.[1] It appears on a scroll beneath the shield of the coat of arms of the United Kingdom.[2] The motto refers to the divine right of the Monarch to govern[3] and is said to have first been adopted as the royal motto of England by King Henry V in the 15th century.[3]

The motto is French for literally "God and my right" (a fuller version of the motto is also quoted as "God and my right shall me defend").[4] The word droit was formerly spelt droict (it is related to English direct); the c was later dropped in accordance with modern French orthography.[citation needed] A better translation referring to the divine right of kings would be "My divine right",[5] this being an example of hendiadys.

For the Royal coat of arms of the Kingdom of England to have a French rather than English motto was not unusual, given that Norman French was the primary language of the English Royal Court and ruling class following the rule of William the Conqueror of Normandy and later the Plantagenets. Another Old French phrase also appears in the full achievement of the Royal Arms. The motto of the Order of the Garter, Honi soit qui mal y pense ("Spurned be the one who evil thinks"), appears on a representation of a garter behind the shield. Modern French spelling has changed honi to honni, but the motto has not been updated.

The literal translation of Dieu et mon droit is "God and my right". However, Kearsley's Complete Peerage, published in 1799, translates it to mean "God and my right hand". (In standard French that would be Dieu et la [main] droite, not mon droit.) The Kearsley volume appeared during publication of the 1st edition (1796–1808) of the German Brockhaus Encyclopedia, which emphasized the raising of the "right hand" during installations and coronations of German Kings.

Use as royal motto

Dieu et mon droit has generally been used as the motto of English—and later British (outside of Scotland)—monarchs since being adopted by Edward III.[10] It was first used as a battle cry by King Richard I in 1198 at the Battle of Gisors, when he defeated the forces of Philip II of France and after he made it his motto.[10][11] The belief in medieval Europe was not that victory automatically went to the side with the better army but that, as with personal trial by combat, to the side that God viewed with favour.[12] Hence Richard wrote after his victory "It is not us who have done it but God and our right through us".[10] So after his victories on the crusades "Richard was speaking what he believed to be the truth when he told the Holy Roman Emperor: 'I am born of a rank which recognizes no superior but God'.".[13]

The Age newspaper published in Melbourne has a stylised royal coat of arms in its masthead that includes the motto. Some do not think it is appropriate emblem for a republic leaning newspaper.[17]

The phrase was the inspiration for a joke motto by The Beatles, Duit on Mon Dei ("Do it on Monday"), which was later adopted as the title of an album by Harry Nilsson.