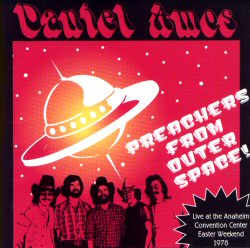 "Preachers from Outer Space!" is the title of a 1994 live album by rock band , released on .

"Preachers" chronicles a bit of what the band was doing in those "missing years" of 1978-1981; after much of the "" album had been finished, and about four years before it would finally be released by its label. The show starts with a few of the band's earlier country/rock songs like "Shotgun Angel," and "Happily Married Man," and then introduces the audience to many songs from the still unreleased album. Also included on this collection are the rare concert favorites, "Mary Baker Eddy" and "Secret Scripts & 3D Glasses" - neither of which has ever been recorded by the band for an album or released officially on any other project.

* Recorded live on 16-track by Rich Houston and , , .
* Tracks 9 & 10 recorded on two-track in by Neal Williams, , .
* Tracks 11-14 Demos recorded on four-track at the Rebel Base, Autumn 1978.
* Mixed by at Mixing Lab A, .
* Mastered by at Digital Brothers, .
* Layout and Design by , Patton Brothers, .
* Photography by Larry Frowick, Scott Lockwood and other folks whose names we've sadly forgotten.
* Original Concert Flyer Illustrated by Rick Griffin.