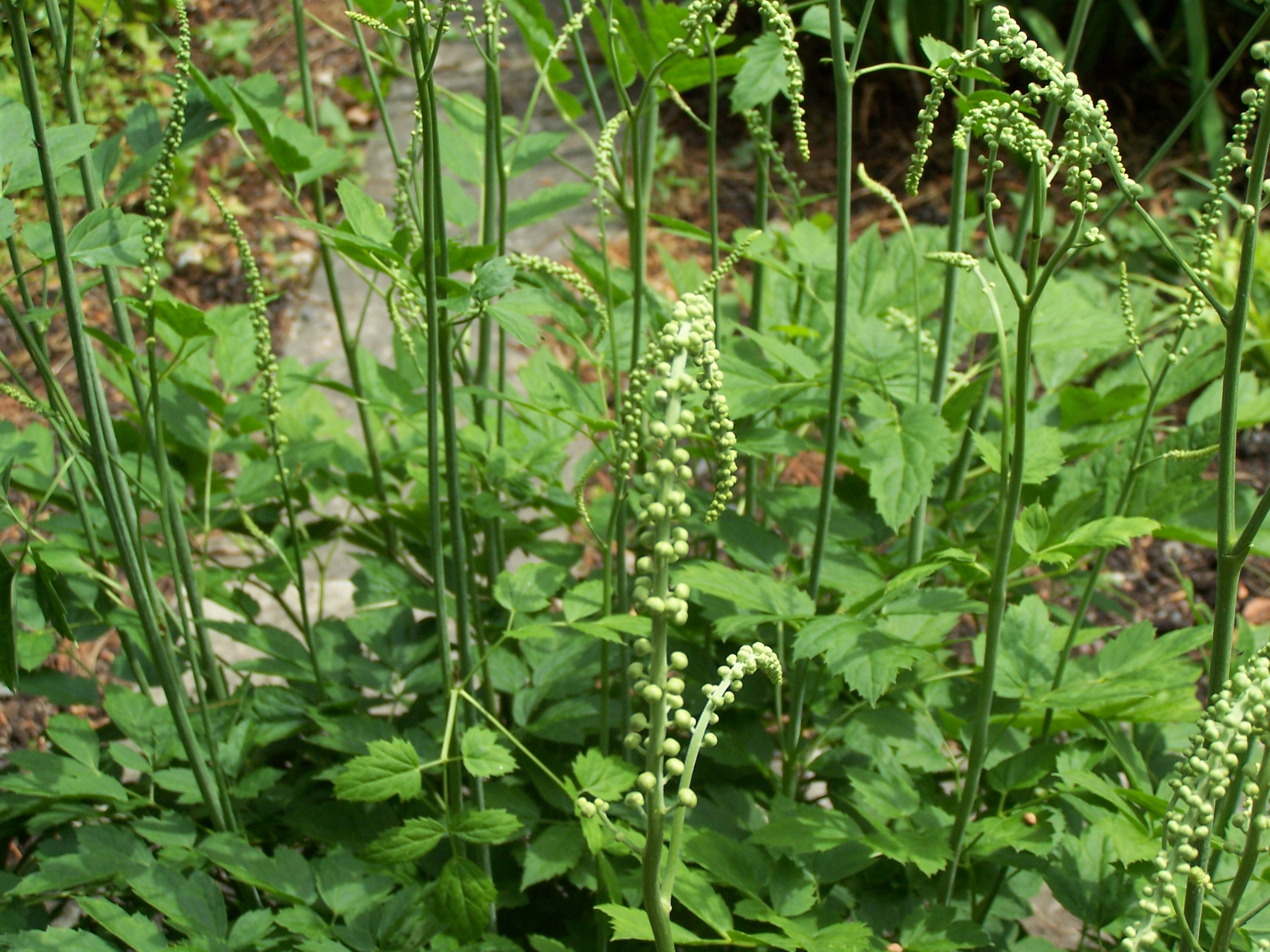 "Actaea racemosa" (Black cohosh, Black bugbane or Black snakeroot or Fairy candle; syn. "Cimicifuga racemosa") is a member of the family , native to eastern from the extreme south of south to central Georgia, and west to and . It grows in a variety of woodland situations, and is often found in small woodland openings.

Cimicifuga has been recently placed in the Actea genus due to new phylogenetic evidence based on DNA similarities. Blue cohosh ("Caulophyllum thalictroides"), despite its similar common name, is a plant of another genus.

Black cohosh has been included in herbal compounds or s marketed to women as remedies for the symptoms of , and other gynecological problems. However, its usage for treating these ailments is controversial, with a recent study conducted with a large group of participants and a range of black cohosh formulations casting doubt on its efficacy, since biological effects of some black cohosh preparations were not performing better than .

It was thought that black cohosh contained -like compounds, but recent research suggests that its biological effects may in part be due to binding to receptors. [http://www.ncbi.nlm.nih.gov/entrez/query.fcgi?db=pubmed&cmd=Retrieve&dopt=AbstractPlus&list_uids=12952416&query_hl=5&itool=pubmed_docsum] Native Americans used black cohosh to treat gynecological and other disorders, including s, kidney problems, and depression. Black cohosh has also been used as an (see side effects).

Like most plants, black cohosh contains a very large number of organic compounds with .

Black cohosh should not be used during or due to possible health risks. There is a case report of neurological complications in a post-term baby after labor induction with a mixture of black cohosh and blue cohosh during a home birth. [Gunn TR, Wright IM: The use of black and blue cohosh in labour. New Zealand Medical Journal 109: 410-411, 1996. [PubMed abstract] ] Other cases of adverse outcomes experienced by neonates born to women who reportedly used blue cohosh to induce labor have been published in peer-reviewed journals. [Finkle RS, Zarlengo KM: Blue cohosh and perinatal stroke. New England Journal of Medicine 351: 302-303, 2004; Jones TK, Lawson BM: Profound neonatal congestive heart failure caused by maternal consumption of blue cohosh herbal medication. Journal of Pediatrics 132: 550-552, 1998]

Black cohosh produces endometrial stimulation. Since black cohosh increases blood flow to the pelvic area, its use is not recommended during menses as it may increase or prolong bleeding. [http://www.stalkingthewild.com/sh/black_cohosh.html | Black Cohosh / Cimicuga racemosa / Herbal Relief For Women, by Phyllis D. Light, RH, LMT Women experiencing "abnormal uterine bleeding" are excluded from enrollment in a 2006 clinical trial to determine whether black cohosh may reduce menstrual anxiety | http://www.clinicaltrials.gov/ct/show/NCT00120458] Because of the possible estrogenic action, it should be used with caution after six months. [The Complete German commission E Monographs recommends a use duration of not longer than 6 months.] Additionally, black cohosh contains tannin, which inhibits iron absorption. [http://www.fammed.ouhsc.edu/ocfmr/journal/Herbal/herbal.htm | 1°Care Exchange -- A Reader-Directed Journal from the Oklahoma Center for Family Medicine Research / Volume 1, Number 1 January 1999.] This, considered with possible effects of enhancing menstrual bleeding, gives good cause to monitor iron stores when taking black cohosh.

No studies have been published on long-term safety in humans. [ Questions and Answers About Black Cohosh and the Symptoms of Menopause | url=http://ods.od.nih.gov/factsheets/BlackCohosh.asp] However concerns arise that, in humans, because of its estrogen-like effects, long-term use may promote metastasis of estrogen-sensitive cancer tissue via stimulation of cells in the endometrium or breast. Black cohosh increased metastasis of cancer to the lungs (but did not cause an increased incidence of breast cancer) in an experiment done on mice (which was never published and the lung tumors were never biopsied, just observed.) [http://nccam.nih.gov/news/pastmeetings/blackcohosh_mtngsumm.pdf#summary NIH.pdf]

The liver damage reported in a few individuals using black cohosh has been severe, but large numbers of women have taken the herb for years without reporting adverse health effects. [Workshop on the Safety of Black Cohosh in Clinical Studies | url=http://nccam.nih.gov/news/pastmeetings/blackcohosh_mtngsumm.pdf#summary] See the NIH link above for thorough discussion of the liver issue. While studies of black cohosh have not proven that the herb causes liver damage, Australia has added a warning to the label of all products containing black cohosh, stating that it may cause harm to the liver of some individuals and should not be used without medical supervision. [Australian Therapeutic Goods Administration alert | url=http://www.tga.gov.au/cm/blkcohosh.htm]

"Cimicifuga racemosa" grows in dependably moist, fairly heavy soil. It bears tall tapering racemes of white midsummer flowers on wiry black-purple stems, whose mildly unpleasant, medicinal smell at close range gives it the common name 'Bugbane'. The drying seed heads stay handsome in the garden for many weeks. Its burgundy, deeply cut leaves add interest to American gardens, wherever summer heat and drought do not make it die back, which make it a popular garden perennial.

* [http://www.efloras.org/florataxon.aspx?flora_id=1&taxon_id=233500379 Flora of North America: "Cimicifuga racemosa"]
* [http://www.missouriplants.com/Whitealt/Cimicifuga_racemosa_page.html Missouri plants: "Cimicifuga racemosa" (detailed photos)]
* [http://ntp-server.niehs.nih.gov/htdocs/Chem_Background/ExecSumm/blackcohosh.html Chemical background of black cohosh.]
* [http://www.sciencedaily.com/releases/2003/09/030908070956.htm Article on a recent study of Black cohosh]
* [http://nccam.nih.gov/news/pastmeetings/blackcohosh_mtngsumm.htm National Institutes of Health (NIH) "Workshop on the Safety of Black Cohosh in Clinical Studies" November 2004] Large .pdf file addresses rare liver toxicty issues, lung mets in the mouse study from 2003, and concludes that there was NO COMPETENT EVIDENCE to support concerns about safety with respect to use of black cohosh in breast cancer patients as long as they are being followed by their doctors.
*Australian Adverse Drug Reactions Bulletin, April 2006, Noted 49 cases of live toxicity worldwide have been associated with the use of black cohosh. 4 Cases in the group required liver transplants. Serious cases of liver toxicity have been reported with use for less than a month. Listed as Do Not Use in Worst Pills Best Pills, August 2006, p63
* [http://www.henriettesherbal.com/eclectic/dmna/cimicifuga.html Cimicifuga racemosa entry in Drugs and Medicines of North America by Lloyd and Lloyd, 1884-1887]