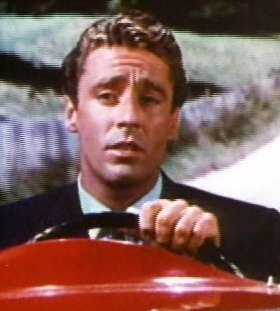 Peter Sydney Lawford (September 7, 1923 &ndash; December 24, 1984) was an English-born American , member of the "," and brother-in-law to President , perhaps more noted in later years for his off-screen activities as a than for his acting. In his earlier professional years (late 1930s through the 1950s) he had a strong presence in popular culture and starred in a number of highly acclaimed films.

Born in , on September 7, 1923, the son of English hero Sir and the former May Somerville Bunny, he spent his early childhood in and began acting at a young age. Lawford's mother was said to have dressed him as a girl in private up until age eleven. Lady Lawford and Sir Sydney were not married when Peter was conceived. Young Peter lived all over the world with his parents. Because of his family's travels, Peter was never formally educated. His lack of education was allegedly a sore subject for the actor, which contributed to his feelings of inadequacy later on as a member of the Kennedy family, and throughout his adult life. In America, Sir Sydney and Lady Lawford were treated as royalty among the well-to-do in their new neighborhood of , and were always invited to events and social occasions. However, they lost whatever source of money they had when war was declared by the UK in 1939.

As a child Lawford severely injured his arm, in his words, "attempting to run through a glass door.". Doctors were able to save the arm, but the injury continued to bother him throughout his life, and the arm was slightly deformed. The injury was considered damaging enough to keep him from entering , but this turn of fate was probably the greatest boon to his career. At that time, was infatuated with heroic Englishmen, and as war movies were being churned out by the dozens and American actors volunteered or were drafted for the war, Lawford put his talents to work "".

Prior to the war Lawford had gained a contract position with the studios. Once he signed with MGM, his mother, Lady May, insisted that studio head pay her a salary as Peter's personal assistant. Mayer declined. Lady Lawford responded by claiming her son to be "a bummer" and that he needed to be "supervised". When Peter learned of his mother's actions their relationship was never the same.

Lawford's first movie role was at age seven in the film "Poor Old Bill". Eight years later, he made his Hollywood debut in a minor part in "Lord Jeff". His first major movie role was "A Yank At Eton" (1942). He played a bish bully opposite . The picture was a smash hit, and Lawford's performance was widely praised. Lawford also made uncredited appearances as an RAF pilot in "Mrs. Miniver" (1942) and as a sailor in "Sherlock Holmes Faces Death" (1943). He won even greater acclaim for his performance in "The White Cliffs Of Dover" (1944), in which he played a young soldier in World War II. MGM gave him another important role in "The Picture of Dorian Gray" (1945). Lawford also made "Son Of Lassie" (1945) and won a readers' poll as the most popular actor in Hollywood. His fan mail jumped to thousands of letters a week. Lawford had become a major star.

Lawford's busiest year as an actor was 1946, when two of his films opened within days of each other: "Cluny Brown" (1946) and "Two Sisters From Boston" (1946). With heartthrobs such as and stalwarts like James Stewart off to war, Lawford was recognized as "the" romantic lead on the MGM lot. He appeared with for the first time in the musical "" (1947). Lawford received rave reviews for his work in the film while Sinatra's were lukewarm. Lawford later admitted that the most terrifying experience of his career was the first musical number he performed (the Jitterbug). He also made his first comedy that same year: "My Brother Talks To Horses" (1947). It was in the musical "Good News" (1947) that he won his greatest acclaim as a performer, holding his own against other cast members with far more training in song and dance.

His first marriage, in 1954, was to Patricia Kennedy, sister of then-U.S. Senator . They had four children; actor Christopher Kennedy Lawford (b.March 29, 1955), and daughters Sydney Maleia Kennedy Lawford (b. August 25, 1956 in ), Victoria Francis Lawford (b. November 4, 1958 in ), and Robin Elizabeth Lawford (b. July 2, 1961). Lawford became an American citizen in 1960, in time to vote for his brother-in-law in the presidential elections. Lawford, along with other members of the "Rat Pack," helped campaign for Kennedy and the Democratic Party. Sinatra famously dubbed him "Brother-in-Lawford" at this time.

Lawford had a reputation as a ladies' man, and was reported to have had many affairs with famous ladies of film, song, and politics. Lawford introduced as she stepped out to sing her infamous "" at in May 1962. Patricia Kennedy Lawford divorced him in 1966 because of his alcoholism and infidelity.

Lawford was very close to Frank Sinatra for a number of years, appearing in several Rat Pack movies and stage acts. Sinatra, however, threatened him with bodily harm when he learned that Lawford had had lunch with , Sinatra's primary love interest at the time. Lawford's friends managed to convince Sinatra that nothing was going on between Gardner and Lawford, but Sinatra refused to speak with Lawford for a number of years. The two were later reconciled, but Sinatra ultimately broke off the friendship after Lawford refused to act as a go-between for Sinatra and President Kennedy after their association had become controversial (Sinatra's alleged mob ties, even if based more on rumor than fact, made White House image guardians unhappy). The end of the Lawford-Sinatra relationship came when the President made plans to stay at crooner 's house instead of Sinatra's during a visit to Los Angeles. Sinatra was especially incensed because Crosby was a Republican. Sinatra's feelings were such that once, when he learned Lawford was in the audience he was about to perform for, he refused to come out until Lawford and his wife were removed from the premises. Lawford and Sinatra never spoke again, though Lawford maintained a good friendship with Rat-Pack-pal . The two starred together in the 1968 film "" and its 1970 sequel "One More Time".

Lawford's alcohol abuse and later drug abuse, as well as strained relationships and financial difficulties, caused a great deal of stress on his increasingly fragile health. Lawford was reduced to television guest shots on such shows as "", "", "", "", "The Name Of The Game", "The Virginian", "", "", "", "", "", "" and "". Besides sitcoms, he also guest-starred on variety shows such as "" and "", and game shows "", "Password", and "Pyramid".

Lawford married his second wife, Mary Rowan, the daughter of comedian , in 1971 when she was in her twenties; the marriage lasted eight months. In 1975, he married Deborah Gould, but the marriage lasted only two months. His fourth and final marriage, in July 1984, after a nine-year courtship, was to . Lawford died in a hospital in Los Angeles on 1984 of cardiac arrest complicated by kidney and liver failure.

His body was cremated and the ashes were interred at . His original interment location was near that of Marilyn Monroe. According to his son, the actor , talking on 's CNN talk-show on September 27, 2005, none of the Rat Pack members attended the funeral, though a number of the Lawford/Kennedy cousins came. Because of a dispute between his widow and the cemetery, his ashes were removed and scattered in the off the coast of California by his widow, Patricia Seaton Lawford, who invited the "National Enquirer" tabloid to photograph the event. Westwood Village Memorial Park still has, as of 2006, a plaque bearing Lawford's name. It is not known if any ashes remain at the site.