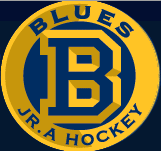 Formed in 1972, the Blues joined the Metro Junior "B" league. The Metro had just been curtailed by the as the many of their top teams were moved to the newly created OHA Junior "A" league. The Blues won the in 1975 as OHA Junior "B" Champions and was one of the top Junior "B" teams in Ontario for almost two decades winning league titles in 1974, 1975, 1985, and 1988.

In 1991, the Metro league (along with the Blues) went Junior "A". The team stayed with the Metro until 1995 when a mass exodus of teams made the jump to the OPJHL. In 1999, the Blues won the Buckland Cup as league champions and the as Central Canadian Champions. They fell short at the .

In the 1990s, the Blues had a working agreement of affiliation with the 's local Chinguacousy Blues minor hockey club.

The slack effort did not pay off. The Blues entered the Semi-final as the favourite to win the , but were upset by the by a score of 3-2. The Vipers went on to win the Cup, and the favourite Blues were left with a long and unhappy ride home from .

After the Royal Bank Cup upset loss to the , the Blues played like a team jinxed. With only one winning season in the last seven, the Blues have never been the same.

Despite initial optimism, at the halfway point of the 2006-07 season the Blues are sitting at a dismal 1 win, 23 losses, and an overtime loss. As of , the Blues are in the basement of the OPJHL and are in danger of missing the playoffs again. On , , the Blues, with a 1-38-1-2 record, were officially eliminated from any chance of making the playoffs. The final blow came with the defeating the surging which pushed the Crushers out of reach in the wildcard race. [http://www.pointstreak.com/prostats/gamesheet_full.html?gameid=355750] The Blues finished the season in last place and with one of the worst records in Tier II Junior "A" history.