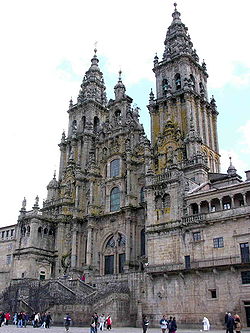 Churrigueresque refers to a Spanish Baroque style of elaborate sculptural architectural ornament which emerged as a manner of stucco decoration in Spain in the late 17th century and was used up to about 1750, marked by extreme, expressive and florid decorative detailing, normally found above the entrance on the main facade of a building.

Named after the architect and sculptor, José Benito de Churriguera, who was born in Madrid of a Catalan family (originally named Xoriguera), and who worked primarily in Madrid and Salamanca, the origins of the style are said to go back to an architect and sculptor named Alonso Cano, who designed the facade of the cathedral at Granada, in 1667.

A distant precursor (early 15th century) of the highly elaborate style can be found in the Lombard Charterhouse of Pavia; yet the sculpture-encrusted facade still has the Italianate appeal to rational narrative. The Churrigueresque style appeals to the proliferative geometry, and has a more likely ancestry in the Moorish architecture or Mudéjar architecture that still remained through south and central Spain. The interior stucco roofs of, for example the Alcázar de los Reyes Cristianos in Granada, Spain, flourish with detail and ornamentation.

The development of the style passed through three phases. Between 1680 and 1720, the Churriguera popularized Guarino Guarini's blend of Solomonic columns and composite order, known as "supreme order". Between 1720 and 1760, the Churrigueresque column, or estipite, in the shape of an inverted cone or obelisk, was established as a central element of ornamental decoration. The years from 1760 to 1780 saw a gradual shift of interest away from twisted movement and excessive ornamentation towards Neoclassical balance and sobriety.

Among the highlights of the style, interiors of the Granada Charterhouse offer some of the most impressive combinations of space and light in 18th-century Europe. Integrating sculpture and architecture even more radically, Narciso Tomé achieved striking chiaroscuro effects in his Transparente for the Toledo Cathedral. Perhaps the most visually intoxicating form of the style was Mexican Churrigueresque, practised in the mid-18th century by Lorenzo Rodriguez, whose masterpiece is the Sagrario Metropolitano (1749–69) in Mexico City, New Spain.