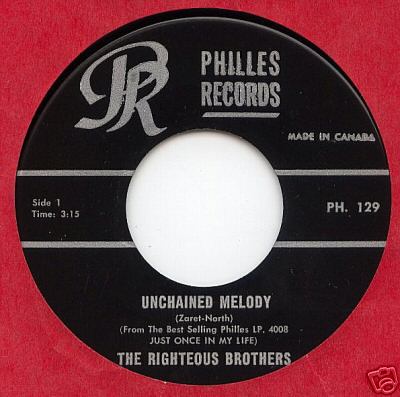 "Unchained Melody" is a popular song with music by and lyrics by . It is one of the most recorded songs of the 20th century, by some counts having spawned over 500 versions in hundreds of different languages.

In 1955, North used the music as a theme for the obscure film "Unchained". , the baritone who performed in the original "", sang the vocals for the film soundtrack. [Robert Rodriguez, [http://books.google.com/books?id=xLaSd2Qyb3AC&pg=PA90&lpg=PA90&dq=todd+duncan+unchained+instrumental&source=web&ots=M888sbPZh3&sig=KyWuaRIozpSa-_wKBfWtlQQhXMk#PPA90,M1 The 1950s' Most Wanted: The Top 10 Book of Rock & Roll Rebels] , "Brassey's", p90 ] ( catalog number 3055), released an instrumental version which reached #2. followed close behind with a [http://78records.cdbpdx.com/list/UNCHAINEDMELODY_AlHibbler_DECCA_29441.mp3 vocal] version ( catalog number 29441) that reached #3 on the Billboard charts. He was followed soon after by whose version hit #1 on the British charts. 's version ( catalog number 9102) reached #6, while ( catalog number 20-6078) took it to #29. [cite book
last = Whitburn
first = Joel
authorlink = Joel Whitburn
title = Top Pop Records 1940-1955
publisher = Record Research
location = Menomonee Falls, Wisconsin
year = 1973 ] Rockabilly legend and His Blue Caps recorded it for their second album in 1956 &mdash; Vincent's version is played at mid-tempo and features a tremolo picking guitar part. It is also probably the most unusual cover version, as the chorus was omitted. sang it at the 1956 where it finished fifth in the voting for the of 1955. In 1963, an uptempo, doo-wop version hit the regional charts (eastern U.S.) by , eventually becoming part of the soundtrack for "" in 1990.

The song regained popularity when another version was produced by in 1965, credited to , but performed as a solo by , who later recorded versions credited solely to him. It climbed to #4.

"Unchained Melody" reappeared on the Billboard charts in 1990 after The Righteous Brothers' recording was used in the box office blockbuster film "Ghost". Two versions charted in the US that year. There was the reissue of the 1965 original Righteous Brothers single which received a lot of airplay, but sales were minimal since it was only available as a 45 RPM single. This version peaked at #13. There was also a 1990 re-recording of the song which was available only as a cassette single. The re-recorded version saw minimal airplay, but excellent sales. It peaked at #19. For eight weeks, both versions were on the Hot 100 simultaneously. This re-release of the song topped the U.S. adult contemporary chart for two weeks in 1990. It reached #1 in the UK, becoming the UK's top selling single of 1990; it also later reached #1 in , staying at number-one for seven weeks through November 1990 and into January 1991.

On , , just six weeks before his death, performed "Unchained Melody" for what would be his last television appearance, "." However, the recording that was ultimately released as a single and included on the "Moody Blue" album (the last released while he was alive) was from an earlier appearance at Ann Arbor, Michigan, featuring him on piano, as it was invariably the case when Presley sang the song in concert.

In 1995, the song was performed by and in the UK drama series "". This version was subsequently released as a single and quickly reached #1 in the UK, becoming one of the country's all time biggest selling records.

The song has become a favorite among auditioners for TV singing contests. It has often been said by to be his favorite song, leading it to be a favourite among those hoping to impress him in auditions for "", "", and "The X Factor". It was performed on the original series of "Pop Idol" by runner-up , who later released it as a single. It was also sung on "" by finalist and 2006's winner , and on "American Idol" by during the Season 2 Top 3 finals, after which he advanced to the Top 2 (finals), as well as on Season 5 Top 6 Love Songs Week, for which she was eliminated.

The song appeared in a commercial featuring two German moulding a car together, in a of "Ghost".

was nominated for a 2005 Grammy award for "Best Instrumental Composition Accompanying a Vocal" for her interpretation of the song, which appears on the "At Last" album. In 2006, singer covered the song on his album "Greatest Songs of the Fifties", and it reached #20.

The song has been #1 on lists of love songs featured on and Five, and also is said to be a favorite of Kevin Jafarey (RCG).

The song is on the game . 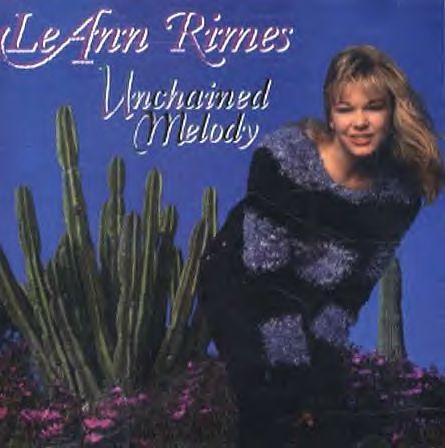 Cover size =
Caption =
Artist =
from Album =
A-side =
B-side =
Released = 1997
Format = ,
Recorded = 1996
Genre =
Length = 3:34
Label =
Writer =
Producer = Wilbur C. Rimes
Certification =
Chart position =
Last single =
This single = Unchained Melody
Next single =
Misc =
*Country singer also recorded the song for her 1997 "".
*The late , one of Ireland's biggest ever stars, recorded a version for his debut album "" in 1968
* references the song in her 2003 single "".
* covered the song on his 1978 album "".
*Irish rock group recorded a cover of the song as a B-side on the "All I Want Is You" single in 1989. The song was first performed live by the band during the , where a brief form of the song was frequently sung after "One," such as the performance on the "" video. The song was played in full by U2 about 20 times during their , but has since only returned to their live shows a handful of times in its original brief form. [cite web| url=http://www.u2-vertigo-tour.com/Unchained_Melody-s41.html |title=Unchained Melody |publisher=U2-Vertigo-Tour.com |accessdate=2007-06-26]
*In 2006, made a cover version in Italian named "Unchained Melody (Senza Catene)" in their second album, "".
*The rock duo Heart (Ann and Nancy Wilson) had a very popular 'live' version of "Unchained Melody" on their "Greatest Hits-Live" album of late 1980. It charted as a single in March of 1981.
*In 1997, covered the song on their album "How Do You Do It".
* recorded a version for her 'Cinema' album (referring to its appearance in 'Unchained'. This version has a 4/4 timing rather than the 6/8 time signature of most other versions, and notable differences in the lyrics of the middle eight ("Lonely mountains gaze at the stars, at stars/ Waiting for the dawn of the day/ All alone I gaze at the stars, at the stars/ Dreaming of my love far away").
* covered the song.
* did a cover of this song for his solo album "Two Of Us", released in 2006.
* covered it on their album .