ONCE (Spanish pronunciation: [ˈonθe]), or Organización Nacional de Ciegos Españoles (National Organization of Spanish blind people), is a Spanish foundation founded on December 13, 1938 to raise funds to provide services for the blind and people with serious visual impairment.

Although it is overseen by a board of patrons made up of representatives from various Spanish ministries, it does enjoy a certain amount of freedom of movement in the day-to-day running of its activities, and its general council is democratically elected from among its members.

Between them, the three pillars of the ONCE — the General Directorate, the Fundación and CEOSA, ONCE's business corporation — employ over 40,000 blind, visually impaired or sighted staff, as well as people with other disabilities.

The three pillars of ONCE

While many of their activities overlap, there are, at least formally, three divisions of the ONCE:

The General Directorate is responsible for the day-to-day running of the organization, its social and cultural work, and so on. Through its general council, it maintains institutional relations with local, regional and national government bodies, as well as representation on international bodies such as the World Blind Union, EBU and IBSA, the International Blind Sports Federation.

In 1988 ONCE established the foundation Fundación ONCE to provide professional training and employment, to eliminate architectural, urban and communication barriers and promote "Digital Solidarity": web-based services for people with any disabilities. The Fundación also has its own business arm, Fundosa, with companies dealing with accessibility, industrial laundering, and so on.

The Fundación is active in the Paralympic movement and is a founding partner of the European Network for Accessible Tourism (ENAT), an international organization set up in 2006 to promote accessible tourism.

CEOSA is the business corporation of ONCE and owns, or is a stakeholder in, several companies across a wide range of sectors, including service companies, hotels and food companies. In the 1980s to diversify risk, i.e., any future potential decrease in sales of the cupón, the managers of the then-affluent ONCE started a policy of profit-oriented investment.

One of its acquisitions was a sizeable participation in the Spanish private TV channel Telecinco and the radio network Onda Cero ("Airwave Zero", based on the ONda CEro acronym). The most visible effect was the Telecinco broadcast of the daily lottery draw, the Telecupón, presented by the highly popular retired actress Carmen Sevilla.

Critics pointed to the paradox of blind "upstarts" running one of the newly created commercial TV channels. There were also critics who claimed that it was a manoeuvre of the then-ruling party in government, the Spanish Socialist Workers Party (PSOE) to indirectly control the media in general.

ONCE no longer has a stake in either of these media companies, although it does still run a media company, Servimedia, that is a news agency specialising in providing information on issues of social interest, such as disability, integration, corporate social responsibility, leisure, etc.

Although ONCE now has several gaming products available, their traditional product and one of the most visible aspects of ONCE is the charity lottery ticket known throughout Spain as the Cupón. Sales of this lottery product are the main source of income for ONCE and can carry huge tax-exempt cash prizes. The draw has different tickets for different days of the week, a special weekend ticket as well as special tickets with higher prizes, usually by season. The draw has for many years been broadcast live every night on Spanish TV channels, including Telecinco and Cuatro. It is currently (as of January 1, 2009) on the Spanish television channel CNN+.[1]

The basic graphic designs on the cupón stay the same on each day, but the theme changes to correspond to current events. For example, when the Euro became legal tender, or cultural references such as national or local monuments, etc. Collecting old issues of the cupón has thus become a hobby for many cupón buyers in Spain.

The ONCE periodically introduces new products onto the market and the information below regarding the prices and prizes of ONCE products may not be up-to-date. 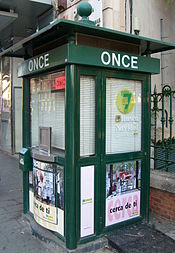 ONCE kiosk in Palma

The cupón is drawn as a five-digit number and a Series number. Prizes vary from how many of the five digits your cupón has, or the amount of numbers it has plus the Series number. The digits have to be in order to win, from left to right. The lowest prize is effectively a refund of the 1,50€ that was used to purchase a ticket.

ONCE lottery tickets are sold on the streets by authorised cupón sellers, as well as in ONCE kiosks. These are clearly identified by the word "ONCE" and can be found along the high street, at airports, and in shopping malls. These points of sales employ the blind or partially sighted, which is one of the main goals of ONCE, although by agreement with Fundación ONCE, over the last few years some have become available to persons with other disabilities.

Like Spain's National Lottery agency, ONCE does not sell its lottery products over Internet, and both bodies continuously issue warnings to that effect, as there have recently been a series of scams involving international criminal organisations claiming to operate as authorised agencies of both lottery institutions. Major (tax-exempt) cash prizes are paid directly into bank accounts once the winner has established contact with the organisation through its delegations throughout Spain.

Likewise, to prevent attempts of fraudulent manipulation and counterfeiting, the cupón itself has a number of embedded security features of different kinds, such as optically variable devices, that are extremely difficult to reproduce. The cupón sellers, whether in the street or in kiosks, use electronic reading devices connected to the ONCE's database to check each winning number, as well as the authenticity of the cupón.

From 1989 until the end of the 2003 season, ONCE sponsored one of the leading cycling teams. Whilst hugely successful in sporting terms and as a marketing vehicle, it was a costly project that was increasingly difficult to justify in terms of the ONCE's commitment to social integration of its members. The former directeur sportif, Manolo Saiz, went on to form the Liberty Seguros-Würth team.