The genus Orius (commonly called minute pirate bug) consists of omnivorous bugs in the family Anthocoridae (pirate bugs). Adults are 2–5 mm long and feed mostly on spider mites, thrips, and their eggs, but will also feed on pollen and vascular sap [1].

These predators are common in gardens and landscapes. They have a fairly painful bite, but are not venomous.

Some species are raised commercially and sold to growers as a form of biological control. 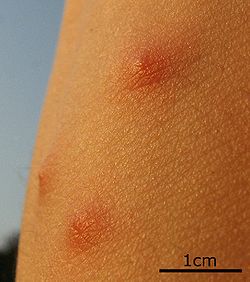 Bites of Orius sp. after one day