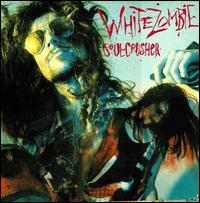 "Soul-Crusher" is the of band White Zombie. It was released in November 1987 on LP under White Zombie's own label "Silent Explosion". In 1988, the album was adopted and re-edited by Caroline Records. The record was the band's first release to feature audio samples in the music. Each label pressed 2000 copies making it a rarity among collectors.

The band claims to have been more pleased with the production of "Soul-Crusher" than any other previous recording. The band praised for giving them creative freedom during the recording process. However, Sean stated that, "We really do need more direction sometimes. We know what we want, but we're pretty inexperienced in the studio." [Sprague, David. "I WALKED WITH WHITE ZOMBIE" "Creem Presents: Thrash Metal". 1988, cited July 31, 2008]

The reception of the album, at the time, was somewhat positive. Critics occasionally list it as being a definitive album and a highlight of the band's career. Bradley Torreano of awarded it 4 out of 5 stars, praising the lyrics and deeming it "a prime slab of noise rock that has aged shockingly well" and that although "Zombie fans might not even like this that much, but no less of an authority than himself pointed to this period in their career as one of his biggest influences" [ [http://www.allmusic.com/cg/amg.dll?p=amg&sql=10:en1uak8k5m3m Allmusic] allmusic reveiw, cited July 31, 2008] . Historian gave it a 7 out of 10 and cited it as one of the bands greatest works and later deemed it one of the best records of the 80s. [ [http://www.scaruffi.com/vol4/whitezom.html#sou Piero Scaruffi's White Zombie page] Piero Scaruffi reveiw, cited July 31, 2008] Billy Lucas and of "Melody Maker Magazine" praised the artwork, lyrics, "slammer guitars", and "scrawling vocals" on the album. [Lucas, Billy. "Soul-Crusher Review". "Melody Maker". June 4, 1988. cited July 31, 2008]

The album, however, has not gone without criticism. Fans of the band's later albums usually dismiss the album, as with most of the band's back catalogue. "Sounds" gave the album three out of five stars; The reviewer citing that the album contained "No melody, little arrangement,just a cacophony of unlovely, forbidding noise that bloodies the nose of rock 'n' roll." ["Soul-Crusher Review". "Sounds Magazine". January 9, 1988. cited July 31, 2008]