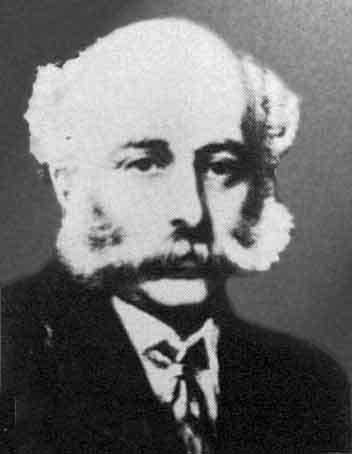 Sir Joseph William Bazalgette ( &ndash; ) was one of the great English of the . As the chief of London's , his major achievement was the creation of a sewer network for central London, which helped relieve the city from epidemics, while beginning the clean-up of the River Thames, which had reached a nadir with "" of 1858.

Joseph William Bazalgette was born at Hill Lodge, Clay Hill, Enfield, , , the son of Joseph William Bazalgette (1783-1849), a retired captain of the and Theresa Philo, née Pilton (1796-1850) and was grandson of a French immigrant. He began his career working on projects, articled to noted engineer Sir John MacNeill and gaining sufficient experience (some in ) in land drainage and reclamation works for him to set up his own London consulting practice in 1842. By the time he married, in 1845, Bazalgette was deeply involved in the expansion of the railway network, working so hard that he suffered a nervous breakdown two years later.

While he was recovering, London's shortlived ordered that all s should be closed and that house drains should connect to sewers and empty into the Thames. As a result, a epidemic (1848-49) then killed 14,137 Londoners.

Bazalgette was appointed assistant surveyor to the Commission in 1849, taking over as Engineer in 1852, after his predecessor died of "harassing fatigues and anxieties." Soon after, another cholera epidemic struck, in 1853, killing 10,738. Medical opinion at the time held that cholera was caused by foul air: a so-called "miasma". Dr John Snow had earlier advanced a different explanation, which we now know to be correct: cholera was spread by contaminated water. His view was not generally accepted.

Championed by fellow engineer , Bazalgette was appointed chief engineer of the Commission's successor, the , in 1856 (a post he retained until the MBW was abolished and replaced by the in 1889). In 1858, the year of the , Parliament passed an enabling act, in spite of the colossal expense of the project, and Bazalgette's proposals to revolutionise London's sewerage system began to be implemented. The expectation was that enclosed sewers would eliminate the stink ('miasma'), and this then reduced the incidence of .

At the time, the was little more than an open sewer, devoid of any fish or other wildlife, and an obvious health hazard to Londoners. Bazalgette's solution (similar to a proposal made by painter John Martin 25 years earlier) was to construct convert|83|mi|km of underground main sewers to intercept sewage outflows, and convert|1100|mi|km of street s, to intercept the raw sewage which up until then flowed freely through the streets and thoroughfares of London. The outflows were diverted downstream where they were dumped, untreated, into the Thames. Extensive facilities were only built decades later.

The system was opened by the Prince of Wales in 1865, although the whole project was not actually completed for another ten years.

Bazalgette's foresight may be seen in the diameter of the sewers. When planning the network he took the most dense population, gave every person the most generous allowance of sewage production and came up with a diameter of pipe needed. He then said 'Well, we're only going to do this once and there's always the unforeseen.' and doubled the diameter to be used. Every Londoner should be grateful for this foresight as the unforeseen was the tower block. If he had used his original, smaller pipe diameter the sewer would have overflowed in the 1960s. As it is they are still in use to this day.

The effect of the new sewer system was to reduce not only in places that no longer stank, but wherever water supplies ceased to be contaminated by sewage. The basic premise of this expensive project was wrong, as so often happens, but the end result was much better than expected, which is a rare occurrence. (The River Thames now contains several smaller varieties of fish, including ; it is also safe to swim in - for those willing to brave the frigid waters and able to find a stretch without !).

Bazalgette was knighted in 1875, and elected President of the in 1883.

He lived for some years at 17 Hamilton Terrace, , north London, where there is now a in his honour.

A formal monument (see photo at right) on the riverside of the Victoria Embankment in central London commemorates Bazalgette's genius.

A living fictionalised tribute to the genius, the work and the ideals of Sir Joseph Bazalgette can be found in the historic Victorian novel [http://www.myspace.com/eustonworms "The Worms of Euston Square"] by William Sutton. This portrays Sir Joseph Bazalgette in a heroic light as a man with an innate social conscience who employs his skills to improve the city that he loves and who plays an active role in rehousing those whose homes were demolished during the enormous work of construction.

What was his edcation and work experience