A safety pin is a simple fastening device, a variation of the regular pin which includes a simple spring mechanism and a clasp. The clasp serves two purposes: to form a closed loop thereby properly fastening the pin to whatever it is applied to, and to cover the end of the pin to protect the user from the sharp point.

Safety pins are commonly used to fasten pieces of fabric or clothing together. They are widely used to fasten cloth diapers (nappies), as the safety clasp prevents the baby from being jabbed. Similarly, they can be used to patch torn or damaged clothing. Safety pins can also be used as an accessory or jewelry, such as earrings, chains, and wristbands. Sometimes they are used to attach an embroidered patch.

The fibula, a form of a brooch, was invented by the Myceaneans on the Greek Peloponnesus between the 13th and 14 BC, and is considered an early precursor to a safety pin since they were used in a similar manner. However, it had major flaws. It had no clasp or spring at the end to help put it in place. Over the centuries, the fibula became forgotten.[1]

Invention of the safety pin 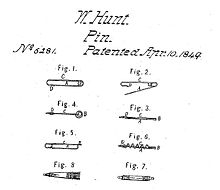 American mechanic Walter Hunt is regarded as the inventor of the safety pin that bears resemblance to those used today. The safety pin included a clasp that covered the point and kept it from opening, and a circular twist at the bend to act as a spring and hold it in place.[2]

Needing to settle a $15 debt with a friend, Hunt one day decided to invent something new in order to pay off his friend. He used a piece of brass wire that was about 8 inches long and made a coil in the center of the wire so it would open up when released. The clasp at one end, was devised in order to shield the sharp edge from the user.[3]

During emergence of Punk rock in the late seventies, safety pins became associated with the genre, its followers and fashion. Some claim the look was taken originally from Richard Hell whom the British punks saw in pictures, and whose style they adopted.[6] This is disputed by a number of artists from the first wave of British punks, most notably Johnny Rotten, who insists that safety pins were originally incorporated for more practical reasons, for example, to remedy "the arse of your pants falling out". British punk fans, after seeing the clothing worn by such punk forerunners, then incorporated safety pins into their own wardrobe as clothing decoration or as piercings, shifting the purpose of the pins from practicality to fashion. The safety pin subsequently has become an image associated with Punk rock by media and pop-culture outlets.