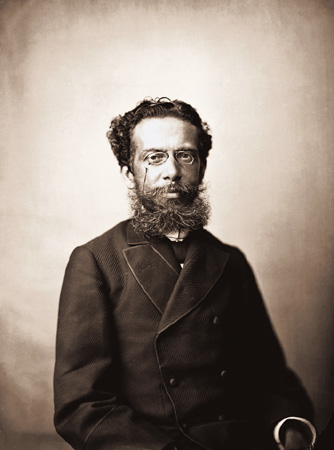 Machado's works had a great influence on Brazilian literary schools of the late 19th century and 20th century. , , and are among his admirers [João Cezar de Castro Rocha, [http://www.plcs.umassd.edu/pdfs/plcs13_14_intro.pdf "Introduction"] . "Portuguese Literature and Cultural Studies" 13/14 (2006): xxiv.] and Bloom calls him "the supreme black literary artist to date." [Harold Bloom, "Genius: A Mosaic of One Hundred Exemplary Creative Minds" (New York: Warner Books), 674. Note however that, in Brazil, Machado de Assis is not often referred to as a black man; there, when at all noted, his ethnicity is usually defined as "pardo".]

Son of Francisco José de Assis (a housepainter, the son of freed slaves) and Maria Leopoldina Machado de Assis (a Portuguese washerwoman from the ), Machado de Assis lost both his mother and his only sister at an early age. Machado is said to have learned to write by himself, and he used to take classes for free will. He learned to speak French first and English later, both fluently. He started to work for newspapers in , where he published his first works and met established writers such as .

Machado de Assis married Carolina Xavier de Novais, a Portuguese descendant of a noble family. Soon the writer got a public job and this stability permitted him to write his best works. Machado de Assis began by writing popular s which sold well, much in the late style of . His style changed in the 1880s, and it is for the sceptical, ironic, comedic but ultimately pessimistic works he wrote after this that he is remembered: the first novel in his "new style" was "Epitaph of a Small Winner", known in the new translation as "" (a literal translation of the original title, "Memórias Póstumas de Brás Cubas"). In their brilliant comedy and ironic playfulness, these resemble in some ways the contemporary works of in the , and in , but Machado de Assis' work has a far bleaker emotional undertone. Machado's work has also been compared with 's "".Machado de Assis could speak English fluently and translated many works of and other English writers into Portuguese. His work contains numerous allusions to Shakespearean plays, and influences from Sterne and Meredith. He is also known as a master of the , having written classics of the genre in the Portuguese language, such as "O Alienista", "Missa do Galo", "A Cartomante" and "A Igreja do Diabo".

Along with other writers and intellectuals, Machado de Assis founded the in 1896 and was its president from 1897 to 1908, when he died.

Machado's style is unique, and several s have tried to explain it since 1897. [Romero, Silvio (1897) "Machado de Assis: Estudo Comparativo da Literatura Brasileira." Rio de janeiro: Laemmert.] He is considered by many the greatest Brazilian writer of all times, and one of the greatest in the world as a romance and short story writer. His chronicles do not share the same status and his poems show a curious difference with the rest of his work: while his Machado's prose is serene and elegant, his poems are often shocking for the use of crude terms, sometimes similar to those of , another Brazilian writer.

Critics are divided as to the very nature of Machado de Assis's writing. Some, such as Abel Barros Baptista, classify Machado as a staunch anti-realist, and argue that his writing attacks Realism, aiming to negate the possibility of representation or even the very existence of a meaningful objective reality. Realist critics, such as John Gledson, are more likely to regard Machado's work as a faithful transcription of Brazilian reality--but a transcription executed with daring innovative technique. Historicists, such as Sydney Chalhoub, argue that Machado's prose constitutes and expose of the social, political and economic dysfunction of Second Empire Brazil. One area in which critics are largely in agreement, however, is best represented by the analysis of Roberto Schwartz. Schwartz points out that Machado's extraordinary innovations in prose narrative are driven by his need to expose the hypocrisies, contradictions and dysfunction of nineteenth-century Brazil. Schwartz argues that Machado inverts many of the narrative and intellectual conventions of his day in order to reveal the pernicious ends to which they are used.

Machado's literary style has inspired many Brazilian writers and his works have been adapted to television, theater and cinema. In 1975 the "Comissão Machado de Assis" ("Machado de Assis Commission"), organized by the Brazilian Ministry of Education and Culture, organized and published critical editions of Machado's works, in 15 volumes. His main works were translated to many languages and great contemporary writers such as , Cabrera Infante and and film director have confessed being fans of his fiction.Fact|date=October 2007

In his works, Machado involves the reader, breaking the so called . This may be one of the earliest uses of this technique.

Machado de Assis was fascinated with the theme of , and many of his novels are built on this intrigue. One of his most popular ones, "", is still widely read in Brazilian schools. [This book is often used in , which is a competitive examination system used by Brazilian universities to select their students.] The volume reflects Machado de Assis' life as a translator of Shakespeare, and also his influence from French realism, especially , and . In the novel, he also refers to "", "", "", "", and most importantly, "". In fact, Helen Caldwell wrote a book comparing the Shakespearian play to Dom Casmurro "The Brazilian Othello of Machado de Assis - A study of Dom Casmurro". It gives new meaning to this story. [Caldwell; Helen. (1960) "The Brazilian Othelo of Machado de Assis: A Study of Dom Casmurro". Berkeley-Los Angeles, University of California Press.] [Fein, John M. The Brazilian Othello of Machado de Assis: A Study of Dom Casmurro. "Modern Philology", Vol. 60, No. 2 (Nov., 1962), pp. 154-155] Although Bento - the main character who got the nickname found in the title - had not killed his wife, as Othello had, both are stories of how jealousy can destroy a happy life in marriage."Dom Casmurro" is a nickname given to Bento in an unimportant case described in the first chapter of the book. While he travels by train from the city to Engenho Novo, he encounters a young man who reads him some poems. Bento, who was tired that day, falls asleep without hearing what is being read to him. The next day, the ignored poet began calling him "Dom Casmurro". "Dom" because of his noble appearance, used in a derogative way. Casmurro is a now old-fashioned word in Portuguese that means "taciturn".

Bento has loved Capitu since childhood. His widow mother had promissed him to be a priest, therefore he can't marry his beloved girlfriend. But an arrangement, his mother sends another boy to fullfill her promise, and Bento and Capitu get married. Some time later, he suspects she is having an affair with his friend, Escobar, who later dies in an accident. Capitu gives birth to a son, Ezekiel, and Casmurro's internal conflict heightens as people point out that Ezekiel resembles Escobar.

The major point in this novel is not Capitu's supposed infidelity, but rather, her husband's version of it. The entire story plays out from Dom Casmurro's point of view, and the subjectivity turns everything into fiction. This focuses the reader's attention on the telling of the story, rather than the story itself.