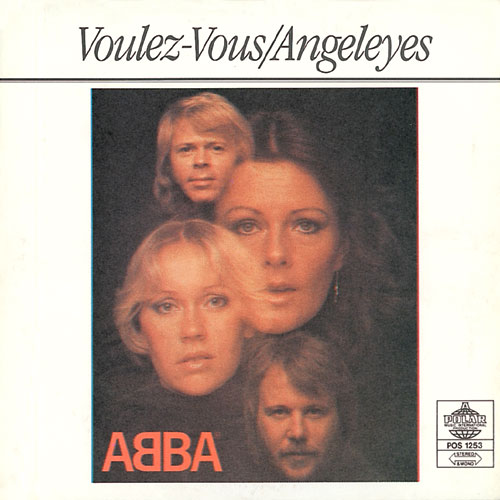 "Voulez-Vous", originally called "Amerika", is one of Swedish pop group 's -oriented hits, and is the second track on the group's 1979 album of the same name, written by and . and shared the lead vocals. In the UK, "Voulez-Vous" was released as a double A-side with "" ("Angeleyes" was the dominant A-side), whereas nearly everywhere else, "Voulez-Vous" was a single A-side. The song also features on the ' album, first as a 4:21 edited version when the compilation was first released in 1992, and then in its full 5:09 version from 1999 onwards. "Angeleyes" is featured on the ' compilation.

"Voulez-Vous" is also the only ABBA song to have been officially released as an extended dance remix - albeit only as a promo. The 6:07 version of the track, released as a double A-side 12" single by in the United States in 1979, was included as a bonus track on the 2001 compilation "The Definitive Collection".

Compared to ABBA's hits both before and after, "Voulez-Vous" was not a major hit for the group. It did top the charts in , and reached the top five in the UK, and the . It peaked at number 9 in , , and , but failed to make the top 10 anywhere else.

At the time of the single's release in the UK, other publications provided singles charts alongside the official chart produced by Music Week for the , and being two examples of publications with their own charts. There were often differences between these charts, but rarely more than a place or two. The double A-side single "Angeleyes" and "Voulez-Vous" caused controversy by reaching No.3 in the Music Week/BBC chart, when it actually rose no higher than No.9 on any other chart and generally missed the Top 10 completely in the majority of the charts produced. BBC Radio 1 acknowledged that there was a discrepancy on air. If there was anything untoward, it was ignored and the No.3 ranking with Music Week/BBC was never disqualified.

* "Voulez-Vous" is one of the numbers performed in the "" musical. In the context of the musical, the song is sung by everyone. The opening lyrics, "People everywhere, the sense of expectation hanging in the air", is used when the boys from Sky's stag party crash the hen party and then every other character joins the dance. However, in little intermission throughout the song, Sam and Harry confront Sophie and tell her that they have realized that they could be Sophie's fathers too. In order to make things more complicated, each of them say they will walk Sophie down the aisle at her wedding. Therefore, the lyrics then ("Voulez-vous, Take it now or leave it, Now is all we get / Nothing promised, No regrets / Voulez-vous, Ain't no big decision / You know what to do, La question C'est Voulez-vous) take the meaning that for Sophie, personally, has the choice to come clean with everyone about what's going on. Yet, she is confused about what to do and does nothing. Also, this song ends the first act.
* At the beginning of the"" video, by , the people are listening to the song when appears the band (O-Zone).