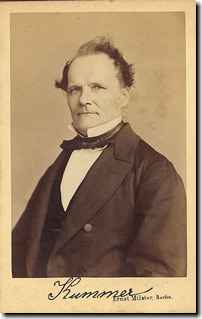 Ernst Eduard Kummer ( - ) was a German . Highly skilled in , Kummer trained German army officers in ; afterwards, he taught for 10 years in a "Gymnasium" (the German equivalent of high school), where he inspired the mathematical career of .

Kummer was born in , (then part of ). He retired from teaching and from mathematics in 1890 and died three years later in .

Kummer made several contributions to mathematics in different areas; he codified some of the relations between different (contiguity relations). The results from taking the quotient of a two-dimensional by the cyclic group {1, −1} (an early : it has 16 singular points, and its geometry was intensively studied in the nineteenth century). See also , and .

Kummer also proved for a considerable class of prime exponents (see , ). His methods were closer, perhaps, to p-adic ones than to ideal theory as understood later, though the term 'ideal' arose here. He studied what were later called s of fields: that is, extensions generated by adjoining an "n"th root to a field already containing a primitive "n"th . This is a significant extension of the theory of quadratic extensions, and the genus theory of s (linked to the 2-torsion of the class group). As such, it is still foundational for .

Kummer also found the Kummer surface, which is a special case of 's s (named after the peak in the discovered around the time of Weil's work. Another explanation is that K3 stands for the trio of mathematicians Kummer, Kodaira, and Kähler). K3 surfaces are the s of dimension two, and have played an important role in .