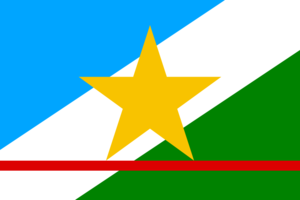 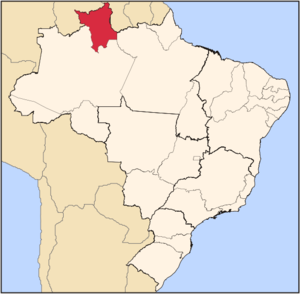 Roraima (pronounced|ʁoˈrajma or IPA| [ʁoˈrãjma] [In . The pronunciation is IPA| [hoˈɾajmɐ] .] ) is the northernmost and least populated state of , located in the Amazon region.

The climate is tropical with an annual mean temperature of 26°C (78.8°F). Most of the state is located in the , with a small strip of to the east. The state is rich in mineral deposits - especially , s, , , and . Many of these deposits are located in indigenous reserves, and illegal mining has resulted in frequent conflicts with the native population, especially that of the and the and allied groups.

The is located around one of the highest mountains of Venezuela, a 2,727 m high known as .

Except in the higher mountains where the climate is cooler but very wet, Roraima has an . This is a type of in which there is no – all months have mean values of at least 60 mm. It is usually found at s within five degrees of the – which are dominated by the . The equatorial climate is denoted "Af" in the . is the natural vegetation in equatorial regions. clearleft

Since the beginnings of the 16th century, the region now considered the state of Roraima was disputed territory, because of its rich reserves. It was sought by the Spanish, Portuguese, Dutch and English until the beginning of the last century. But in 1943, together with a section from the state of , the created the territory of , which became Roraima in 1962. In 1988, Roraima became a state by decision of the . The name of the state was taken from , whose name comes from the words “roroi” (“cyan”) and “ma” (“large”).

was opened on , , and underwent its first big remodeling in 1998. The passenger terminal, runway and apron were all enlarged, and a separate was built. The has the capacity to receive 675,000 s a year in total and .

The blue of the flag represents the pure air and the sky of Roraima, the white strip symbolizes peace, and the green to the right represents the forests and fields. The star - symbolizing the state in the national flag of Brazil - is yellow, which symbolizes the mineral resources of the state. The red line in bottom stands for the , which cuts through the state. The flag was designed by the artist Mário Barreto, and was adopted by Law No.133 of , .