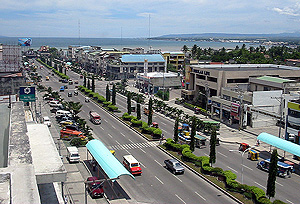 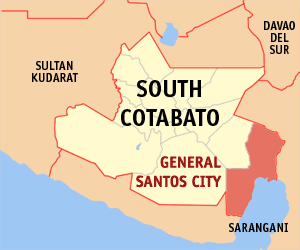 The City of General Santos (abbreviated G.S.C. or Gensan.; Filipino: "Lungsod ng Heneral Santos", Cebuano: "Dakbayan sa Heneral Santos") is a city in the . Situated in the southern part of the country, in the province of South Cotabato. The city has a population of 535,747 as of 2007, making it as one of the populous cities in the Philippines.

General Santos City is bounded by three municipalities of and two municipalities of , namely , , , and . The city's economy is primarily agro-industrial. As a component of the growth area, it has contributed much to the area's emergence as the country's leading producer of major commodities. Due to its rich soil, good rainfall and typhoon-free climate, the area is the largest producer of , s, , s, and . The area also produces other high value crops such as exotic fruits, , vegetables, cut flowers and . It accounts for the largest daily total of landings in the country and is the leading producer of sashimi grade . Residents boast that fish and seafood do not come fresher than in their city.

On , , General Paulino Santos led the first and largest batch of settlers organized under the National Land Settlement Administration to the shores of Sarangani Bay. The 62 pioneers, who mostly came from Luzon, industriously tilled Cotabato's fertile expanse of land. After this first influx of pioneers, thousands more from and migrated into the area.

Six years later, in June 1954, the Municipality of Buayan was renamed General Santos as a tribute to its great pioneer. This was made possible by Republic Act No. 1107 authored by Congressman Luminog Mangelen of Cotabato Province.

From 1963 to 1967, during the incumbency of Mayor Lucio A. Velayo, an upsurge in the municipality's economy was experienced as several large agri-based corporations such as , General Milling Corporation and UDAGRI expanded into the area. Although it was then qualified to become a fourth class city, the residents rejected a move by Congressman Salipada Pendatun to convert General Santos into a city and to rename it Rajah Buayan.

Finally, on , , upon approval of Republic Act No. 5412, the Municipality of General Santos was converted into a city while keeping its name. It was inaugurated on of that year. Antonio C. Acharon became its first city mayor. In 1988, two decades after its inauguration, it was declared as a highly urbanized city.

General Santos City lies at the southern part of the Philippines. It is located at 6°7'N 125°10'E. The city is southeast of Manila, southeast of Cebu and southwest of Davao. The municipalities of Alabel, Malungon and Maasim of Sarangani Province and the municipalities of Polomolok and T'boli of South Cotabato surround the city. Fertile agricultural lands at 17,489 hectares are 32.63% of the city's total land area.

is politically subdivided into 26 s.

The city serves as the inbound destination for the sights, sounds and culture of . Air, sea and land transport provides easy access to the key cities in the Philippines. The city is base to the Philippines' second largest airport-in-area and has one of the most modern seaports in the country.

*AirThe is the largest Airport in Mindanao., It has a 3,227-meter runway capable of handling wide-bodied jets like and . This puts almost all key cities in the Philippines. It currently handles direct flights to and through and .

*SeaThe Makar Wharf is considered one of the best in the country. With a 740-meter docking length and a 19-meter width, the wharf connects the City to destinations within and outside the .Negros Navigation, WG&A and Sulpicio Lines provide the route while n shipping lines contribute their GenSan-Indonesian route for passenger and cargo traffic.

*LandInbound and around land travel is a fast and convenient ride. With more than 400 passenger and wielding routes within, to and from the growth region, getting to your place of destination is a comfort. - three wheeled motorcycles with side-cars, are the City's main mode of land transportation and has been in the road since the pioneering times. Air-conditioned and rent-a-cars are also readily available. The Pan-Philippine Highway links GenSan to other Major cities in Mindanao and to the rest of the country.

The presence of major economic infrastructure support facilities provide the city an edge in terms of comparative advantage due to its standards that are comparable to international benchmarks.

The city provides modern and digital communication offered by major telecommunication companies. The availability of Internet Service Providers serve also as major key to be top of the domestic and international businesses.

There are 59 banks operating in the city composed of 46 commercial banks, 5 savings banks, 1 cooperative and 7 rural banks in 2000. Aside from this, there are 49 pawnshops providing emergency loan assistance and 48 lending institutions.

General Santos City registered 1,505 new medium to large enterprises in 2000. Aggregate investment involved is estimated to be around P 1.899 billion, generating 4,361 new employees. Of the total investments, 76.03% were for social and personal services, 9.77% in wholesale/retail trade business, 4.38% were in manufacturing while the least at 0.02% were invested in mining & quarrying.

Down the southern tip of Mindanao, expanding from the basin of , lies the City of General Santos - a fortress of modern amenities that is endowed with the beauty of nature and diverse cultures abound. Is a gateway in discovering the boundless beauty of Growth Region.

The City pampers its guest with tons and tons of TUNA and other fish delights that gave birth to several eating institutions. Wide range of dining establishments pop-up right into the heart of the city which can fill your cravings with satisfaction beyond capacity with a variety of Mindanaoan, Filipino, Asian and Western delicacies. Fresh-from-the-catch seafoods and right-from-the-harvest agricultural products have perfectly matched to make a savory and sumptuous array of dishes in its various food outlets and restaurants.

Topping the list of must-eats are TUNA and OPAH("Dayana"), two of the best sellers among local celebrities, which come served as the exciting SUTUKIL:SUGBA (Charcoal-boiled in special sauce, dipped in the requisite Toyomansi), TULA (Soup in ginger, onion, lemon grass, pechay and tomatoes), and KINILAW (Fresh cuts in vinegar, shallots, cucumber and pepper).

General Santos City celebrates Kalilangan Festival every February 'Kalilangan' means festival, festivity or jubilee. It is a social gathering marked by exchanging of amenities among traditional leaders, elders, allies and subordinates in varying tones. In a broader perspective, Kalilang projects a positive and dynamic meaning for it engulfs the artistic, humane and altruistic aspects of social interaction that takes place in any occasion or celebration. Kalilangan is a noble tradition. It is a complete work of art nourished and nurtured by rich cultural heritage that has withstand the test of time from generation to generation.

It is also a pageantry of unique and colorful ethnic rites, rituals and traditions like marriage celebrations, religious ceremonies, anniversaries, funerals, enthronement of royal dignitaries, thanksgiving and other forms of social, political and economic activities.

It is not just an economic activity, but a continuous season of merriment, gaiety and merrymaking accentuated by sharing of gifts, traditional sports competition, dancing, singing and instrumental rendition and other forms of exhibition games, entertainment and amusement.

Every September a part of the charter celebration. General Santos City is known as the Capital of the . Thanksgiving and festivities are being celebrated annually through its Tuna Festival. Focusing on its main industries. Tuna Float is an awesome event to taste also sumptuous tuna treats during the Tuna Culinary Contest.

Located 15km at the North East side of , at Barangay Conel, Kalaja Karsts Land derived her name from “Kalaha” or frying pot due to the surrounding towers of karsts formation made millions of years ago. It produced waterfalls and caves. Opposite to this area were the (camping ground) of Nopol Hills which borders Conel and Brgy. Mabuhay. The place offers wide view of Gensan, Bay and some parts of and .

During , Gen. Santos City become one of the last frontiers between the American, Filipino and Japanese forces. Japanese retreating forces made Kalaja Karsts Land as their last ground for defenses, constructing round cemented bunkers and tunnels. Today, one can still see bunkers at but unfortunately for the tunnels, most were deformed and even destroyed by treasure hunters and land developers.

*World boxing champ hails from Brgy. Labangal.
*The city is one of the fast growing cities in the .