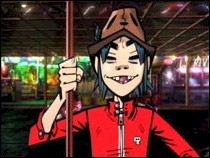 2D (sometimes spelled 2-D) is a member of the fictional band . His real name is Stuart Pot, but he is often called Stu-Pot for short. He performs the lead vocals and plays the keyboard for the band.

2D is actually a nickname derived from the fact that he has a dent in each eye socket, both caused by run-ins with Murdoc's vehicle. His real name is "Stuart Pot" (his last name was often thought to be Tusspot, though his family changed their name to Pot shortly before Stu was born), most of the time shortened to "Stu-Pot". He was born and raised in Hertfordshire, England. His father, David Tusspot (who died in his sleep shortly after Demon Days was released), worked as a mechanic and owner of the Tusspot's Fairground. His mother, Rachel Tusspot, was a nurse who supplied Stu-pot with headache pills. Stu-Pot wasn't very intelligent.He was known as a kind person and had a general love of music. He hit his head when falling from a tree at the age of eleven, which caused his hair to fall out. When it came back it was a deep 'azure blue'. He was forced to move to Crawley, West Sussex, as a result of a lawsuit filed by Ivana Abramovitch for breaking Abramovitch's hand.

Stu-Pot attended St. Wilfred's school where, despite his lack of intelligence and ambition, he got fairly good grades. For most of his life, Stu-pot didn't know what he wanted to do when he got older. He first wanted to become a storm chaser and then he wanted to paint. He developed an interest in machinery when he and his dad customized his keyboard and lead singer. His musical idol was and his favorite band was .

At age 16, the drama in his life began when hooligan Murdoc Niccals, age 18, purposefully crashed his Vauxhall Astra through the wall of Uncle Norm's Organ Emporium, where Stu-Pot had been working, in an attempt to ramraid it and steal the synths. Murdoc's bumper crashed into Stu-Pot's face, landing him with a Hyphema|eight-ball fracture in his right eyeball, and putting him into a deep catatonic state. Murdoc was arrested and sentenced to carry out 30,000 hours of community service as well as care for the vegetablized Stu-Pot for 10 hours every week.

Not long after, in a poor attempt to impress some women, Murdoc performed a 360 in a Tesco car park in Nottingham with his vehicle. This sent Stu-Pot crashing through the windshield, hitting his head on the curb. He woke from his coma and also dented his left eye to match his right one, thus gaining him no eyes. It was then that Murdoc dubbed him "2D", revealing that the origins of the name "2D" have nothing to do with the phrase "two-dimensional", but rather stands for the two dents in his head. Rather amusingly, Stu-Pot adores his new nickname, dropping use of his birth name completely and even signing formal letters with the first name "Two" and surname "D". 2D would appear to have a chronic history of violent blows to the head, coupled with a complete lack of natural intelligence. Damon Albarn and Jamie Hewlett commented on this, saying that he has a blank sheet of paper where a brain should be.

During the hiatus, 2D went to work on his parent's funfair. He collected money for a ride called 'The Waltzer' and there he met Shane Lynch from Boyzone and the two became good friends. He didn't really think about Gorillaz until 4 years later, he received a text message from Noodle and with that he decided to return to Kong with fully restored confidence after he realized he was the cause for the Gorillaz success:

After the El Mañana conspiracy, 2D and Russel were frantic about Noodle's supposed death. It was a hoax, however, and the band has once again gone separate ways but not for long (so promised Murdoc in the autobiography Rise of the Ogre; their biggest project to date is apparently being planned) and the singer was, according to Murdoc, "...pouncing off somewhere. He's probably gonna try and become an actor or a model or whatever..."

As of , , according to an official mail-out, Murdoc says that, "2D is on a vacation at aJamaican beach."On November 13th the D-Sides text in the G-Shop stated that 2D is currently completing a law degree.

Also stated in "Rise of the Ogre", he lost his tonsils in a food fight that started at the party held in honour of the Gorillaz label signing when an was pushed into his face.

Despite missing his two front teeth, 2D can sing clearly. His speech, while still mainly clear, has a definite Cockney (or thereabouts) accent -- he says "summfink" instead of "something", and "fing" instead of "thing" (Example: "I don't want to sound big-headed or nuffink, but it's good to know that you're the biggest and best fing on the planet."). His singing voice has become deeper since the first album.

Like Noodle, 2D's looks seems to have changed from phase one to phase two, though not nearly as drastic as young Noodle. In phase one 2D is seen with very geometric, and almost purple hair at times, unlike in phase 2; there his hair has seemed to gain a more realistic, lined tone and has turned to an almost teal color, and his shape in phase one was almost ruler-straight, he seemed to gain some tone and shape in phase two. this gave him more of a 'hippy' look, compared to his Phase 1 appearance.

2D is known to be very innocent and trusting, and especially accident-prone, as exhibited in the video for the song "" (where he is hit repeatedly with billiard balls), as well as in a promo for the song "DARE" (in which he was hit by two bumper cars).

2D is also somewhat of a sissy, as he can't seem to stand up to people on many, if not all, occasions (such as scene in which Russel asks 2D to kill an eel for his dinner).

Because of the 'eight-ball fractures' in his eye sockets, 2D currently suffers from very intense migraine headaches. As a result, he is pretty much permanently doped up on painkillers, which doesn't help his intelligence either. Despite his high level of mental deficiency, his occasional bouts of insight and philosophical statements can be taken to imply some sort of activity in his brain. It is debatable, though.

Though Murdoc is the one known for taking credit for other people's work, 2D once tried to take credit for Murdoc's work. In 'Rise of the Ogre', he claimed he wrote most of the first album, before Murdoc angrily corrected him.

2D is although he is primarily left-handed.

As stated by Noodle during various interviews, 2D is said to smell like "butterscotch", Russel of "box-fresh trainers", and Murdoc of " on toast".

As stated in the Takeover, 2D was actually born in Hertfordshire, England, but moved to Crawley where he grew up, due to the fact he broke his piano teacher's hand.

2D was known to become very nervous, even shy, around people he has strong feelings or admiration for. One example of this is with bandmate Murdoc, as when 2D gains one of Murdoc's rare compliments, he was said to 'blush like a traffic light stuck on red.'

2D claimed to "bronze" when the Gorillaz were discussing the filming of the Dirty Harry video in , though Murdoc quickly added to the quote, saying that he burns "like an embarrassed lobster".

2D claims he's vegetarian, but due to the fact he added "so my would have to be , or something" the fanbase has decided he merely does not eat red meat. He has also stated that he is allergic to pickles in a Q & A session on the official Gorillaz fansite.

Additionally, during the period of the Gorillaz' first album, 2D was intimidated and violently bullied by Gorillaz bassist, Murdoc. But after returning home to work at his family's fair, he realized that he was the "real driving force behind the Gorillaz", and subsequently returned to the band with more confidence on their second studio album "". 2D still sometimes looks up to Murdoc and if Murdoc is upset; 2D would often call him 'sir' or 'boss'. One could say that 2D considers Murdoc like an older brother and even called him his 'best mate'. He is known to have a good relationship with Russel after Russel stood up to Murdoc for him. 2D has also been known to have a "zen bond" with Noodle.

2D's interests include , s, , and films. After the hiatus, 2D was seen at certain times with a in his hands. As seen on the official Gorillaz website, he owns a triple plasma screen entertainment system devoted entirely to the purpose of playing "widescreen ." One area of interest is the variety of slogans he wears on his T-shirts, which he claims are made by himself, or imagined by Jamie Hewlett. 2D says that he doesn't actually know what Jamie mean's, but he wears them because they make him look informed on popular culture. Among such slogans are "Born a Zombie from Mercur", "Born To Lie", "Hello Kinky" (an obvious play on "Hello Kitty"), "Captain Howdy" (a reference to the demon spirit from ), "Tazar Yoot", "Pink Rabbit Sez: Shoot To Ill" and "T-Virus", (a likely reference to the from the Resident Evil series.)

One of his other favourite movies is "", as illustrated when he does one of the "Happy Hands" signs from the movie in the music video for "Dirty Harry" and in his room on the Gorillaz website he has a poster on his wall of Napoleon Dynamite which links to the movie's site . 2D has also stated in an interview that the keyboard collaboration in Dirty Harry was something that he had picked up from watching Sesame Street. During interviews, he has been voiced by , as well as . He also admits that he uses his phone to play pong or other games while the other members do their solo parts (as seen in such performances as the duet with Madonna at the annual award show).

2D is a , he once had a shrine in his bedroom from the official website.

Some of 2D's possessions has a sticker that say "I [heart] YOKO". Some believe that YOKO is actually referring to .