Ditlev Conrad Blunck (22 June 1798 – 7 January 1853) was a Danish painter associated with the Danish Golden Age during the first half of the 19th century.

He was born in Holsten in 1798. In 1814 he began his studies at the Royal Danish Academy of Art in Copenhagen as a student of C.A. Lorentzen (1746-1828). Concurrently he received teaching from C.W. Eckersberg together with Wilhelm Bendz (1804-1832), Ernst Meyer and Albert Küchler. In 1818 Blunck moved to Munich, presumably dissatisfied with the teaching he received, and enrolled in the Academy as a student. He stayed there until 1820, then returned to Copenhagen.

Back in Denmark, Blunck became a student of the new professor, historical painter J.L. Lund (1777-1867), who was to become a major influence on his painting. Thus, it was also mostly history painting, that marked Blunck's early work. Later, through genre painting, it became representative of the kind of everyday realism, that was to appear in Danish art in the mid 1820s. 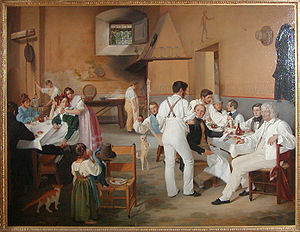 The influence from J.L. Lund grew particurlarly clear during his stay in Germany beginning in 1828. In Berlin, Munich and Dresden he became acquainted with J.L. Lund's artist-friends, including the famed romantic painter Caspar David Friedrich (1774-1840). He was, however, more influenced by the works of Johann Friedrich Overbeck (1789-1869) in changing his artistic direction. He began to devote himself to the religious motif and developed like few other Danes a painting style, that was strongly influenced by the Nazarene movement.

Blunck's stay abroad also brought him to Rome. Here, he joined the group around Bertel Thorvaldsen (1770-1844) and produced several of his major paintings including Danish artists in the inn La Gensola.