Escape from the Planet of the Apes

Escape from the Planet of the Apes

Infobox Film
name=Escape from the Planet of the Apes 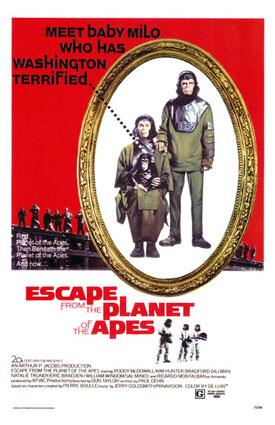 "Escape from the Planet of the Apes" is a film starring , , and . It is the second sequel to the "Planet of the Apes" movie of 1968, the first sequel being "" (1970). This sequel is considered by critics to be one of the better of four sequels made. Its plot centers around many social issues of the day including race, social status, scientific experimentation on animals, nuclear war and government intrusion as well as women's rights.

In this film, actor Roddy McDowall returns to recreate the character of Cornelius which he created but did not portray in its entirety in the previous film. A new character of Dr. Milo is introduced played by actor , who hoped his career would gain from the new project much as McDowall's career had from participating in the first film.

The preceding film, "Beneath the Planet of the Apes", ends with a 's destruction of all life on the apes' future .

"Escape from the Planet of the Apes" begins by establishing that three s (Cornelius, Zira, and Dr. Milo, played respectively by , , and ) escaped the Earth's destruction. They have managed this by salvaging and repairing the astronaut Taylor's spaceship (which sank in the first movie) and piloting it through the of Earth's destruction sending the ship through a back to the 20th century.

The apes arrive on present-day Earth, splashing down on the Pacific coast. The navy hauls the ship to the beach, and the apes remove their helmets. They are quickly transported to seclusion for examination and are later moved to a secluded area of the Los Angeles Zoo. Milo is killed by a noncivilized who was agitated by an argument between himself, Zira, and Cornelius, leaving the two remaining apes under the observation of two scientists, Stephanie and Lewis. Both discover the apes' power of speech. Meanwhile, a Presidential Commission has been formed to investigate the return of Taylor's spaceship and how the apes, which they already are aware are atypically intelligent, came to be aboard it. The apes then are brought before the Presidential Commission, where they reveal publicly their ability to speak, and are welcomed as guests.

The story of the plague that killed off all dogs and cats, as well as that of Ape slavery and subsequent uprising, is a of both prior movies, wherein the apes do not know of their true past. Cornelius' claim that he had read history scrolls (kept secret from the masses) that detail the human downfall could be a way to rationalize the change, but fails to explain why he is as clueless as the rest of Ape society in the previous movies. He may have had access to them, off screen, during the presumed months prior to "Beneath", when Zaius made Cornelius his proxy, or while he and Zira were traveling in the spaceship. Another conflict is that, according to Cornelius, the day of Aldo speaking the word "no" is an annual observance in their society.

The apes become celebrities, being lavished with presents and media attention. They are soon watched by a scientist, futuristic consultant Dr. Otto Hasslein (), who discovers Zira is pregnant and fears for the future of the human race. He is determined to force the issue, gives Zira a to get information out of her and convinces the Commission to have the apes taken for proper questioning. Both are questioned under numerous means; as a result, Hasslein learns for himself that Zira examined and operated on humans in the future. Suspicion had already been aroused by Zira's letting slip, during public hearings, that she had dissected humans in the course of her work. More importantly, Hasslein learns how the human race will eventually meet its downfall and be dominated by simians, which will eventually lead to Earth's destruction.

After Cornelius accidentally kills an orderly (who had teased Zira) while imprisoned, Hasslein uses it as an illustration of the future danger the apes present and calls for the apes' execution. The U.S. President reluctantly orders that the unborn child's birth be terminated and that both be sterilized. Running for their lives, Cornelius and Zira (assisted by Stephanie and Lewis) find shelter in a circus run by Senor Armando (). There Zira gives birth to a son, whom she names Milo (later known as Caesar).

Hasslein, knowing Zira will imminently give birth, orders a search of all circuses and zoos. As a result, Armando must send the apes away. The drama climaxes aboard a derelict ship in an abandoned ship yard. Hasslein tracks the apes down, and finds Zira resting with her infant. The fearful but ruthless Hasslein shoots Zira in cold blood after she refuses to hand over her infant and then proceeds to fire several shots into the infant; he is immediately shot to death by Cornelius, who holds a pistol, and falls overboard. After Cornelius kills Hasslein, he is shot by an unseen sniper (this unseen person is left mysterious to the viewer) and, as Stephanie and Lewis watch in horror, falls to the deck of the ship. Zira tosses her dead baby over the side of the ship before crawling to lie with her husband and dying by his side.

The survivors, however, are unaware of the real fate of the infant ape; Cornelius, Zira, and Armando having switched babies before their final escape. Armando now watches over the infant Milo, who will grow up to become Caesar, the in the third and fourth sequels, "" and "". The film ends by showing the baby ape Milo sitting in a cage, plaintively speaking the words "Mama? Mama?" with the voice of a human child. This ending was purposely written so that the writers would have something with which to work, in case Fox Corporation wanted another sequel, although it was clearly stated in the DVD's bonus materials that this film was to be the end of the series and that Cornelius' speech should have made it full circle.

*
* 78% rating
*
* [http://rhandley.0catch.com/POTA The Hasslein Curve--A Timeline of the Planet of the Apes] -- A massive timeline of all events from the films, TV series, cartoons, novels, comics and other tales.