:"This article is about the 1966 horror film produced by Roger Corman. For the 1971 Italian horror directed by Mario Bava, see "". For the death metal band, see .Infobox_Film
name = Blood Bath 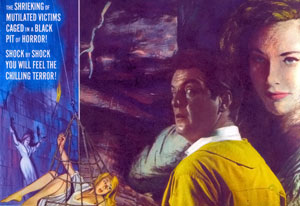 The film had a convoluted production history, initiating as a 1963 -made thriller co-financed by , who deemed the final product unreleasable. Numerous horror sequences were later shot and edited into the film, first by Hill in 1964, then by Rothman in 1966. Corman approved of Rothman's version and the film was given a brief theatrical release by , with and directorial credit jointly shared by Hill and Rothman.

In , student Daisy () leaves a club alone after having an argument with her boyfriend Max (Carl Schanzer). Walking through the deserted streets, she stops to admire some gruesome paintings in a gallery window painted by artist Antonio Sordi (Campbell), who coincidentally also comes by to look in on his "lost children." After a friendly conversation, Sordi convinces the young woman to pose nude for him that night. At his bell-tower studio, Sordi is possessed by the spirit of a long-dead ancestor and suddenly transforms into a vampiric monster who hacks the screaming Daisy to death with a cleaver. Afterwards, he lowers her mutilated corpse into a vat of boiling wax.

Sordi, in his vampire form, stalks Venice in search of victims; he is able to do so freely at all hours. In the middle of the day, he chases a young woman into the surf at a beach and drowns her. At night, he kills a prostitute in a car while pedestrians stroll by, all of them assuming the pair are lovers sharing an intimate moment. Another victim is approached at a party, chased into a swimming pool, and drowned there after the other guests have moved into the house. The murdered women are carried back to Sordi's studio and painted by the artist, their bodies then covered in wax.

Max wants to make up with Daisy but cannot find her anywhere. Learning that she has posed for Sordi and become the subject of the latest in the artist's series of "Dead Red Nudes," he visits her sister Donna (Sandra Knight) to ask her forgiveness. Donna tells Max she hasn't seen Daisy for days, and is concerned about the recent rash of disappearances. She reads Max the legend of Sordi's 15th-century ancestor Erno, a painter condemned to be burned at the stake for capturing his subjects' souls on canvas. Unable to convince Max that Antonio Sordi might also be a vampire, she confronts the artist at his studio and asks him if he has seen Daisy. He angrily brushes her off. That night, he later follows her through the streets and murders her as she tries to escape from him on a carousel.

The "human" Sordi is in love with Dorian (Linda Saunders), an ballerina and Daisy's former roommate. At first he tries to protect her from his vampiric tendencies, warning her his studio is a cheerless place and at one point breaking a date with her to spend time gaining control of his feelings for her. When she turns up at the studio unannounced, he believes she is the reincarnation of Erno Sordi’s long-dead mistress Melizza (also played by Linda Saunders), a witch who had denounced him to the ecclesiastical courts in order to protect herself from prosecution, and traps her in a net. He is about to slash her throat with a razor when Max and his beatnik friends finally realize Sordi is a murderer and successfully free her from the tower. Melizza, seen in a painting that Sordi keeps concealed behind a curtain, brings three of Sordi's victims back to life and they dispatch him by forcing him into the boiling wax.

"Blood Bath" had possibly the most production history of any horror movie ever made.

In 1963, while on vacation in Europe, Corman made a deal to distribute an unproduced Yugoslavian espionage thriller to be titled "Operacija Ticijan/Operation: Titian". Corman bought the rights to the film for $20,000 and insisted on control over the production to ensure it could be adequately “Americanized”. To this end, Corman provided two cast members, William Campbell and Patrick Magee, who had appeared together in Corman’s "The Young Racers" and ’s Corman-produced "". In addition, Coppola was installed as the production’s script supervisor. The completed film was deemed unreleasable by Corman, although a redubbed, slightly re-edited version was eventually released directly to television under the title "Portrait in Terror".

In 1964, Corman asked director to salvage the film. Hill filmed additional sequences in Venice, California, in order to match the original movie’s European look, and turned the former spy thriller into a horror movie about a crazed madman who kills his models and makes sculptures out of their dead bodies. Campbell was available for the reshoots and insisted on a sizeable paycheck to appear in the film, reportedly angering Corman, who nonetheless agreed to the actor’s demands. Hill added all of the beatnik-related scenes shot with and , and was responsible for what many fans believe is the single most effective sequence in the film, the hatchet murder of Melissa Mathes. Magee’s role was more or less retained intact in this version. However, Hill’s version of the film, retitled "Blood Bath", has never been released, as Corman once again was unhappy with the results.

In 1966, Corman made another attempt to create a workable film. He hired another director, , to change the story as she saw fit. While retaining much of Hill’s footage, she changed the plot from a story about a deranged, murderous artist to a story about a deranged, murderous artist who is also a vampire. Because Campbell refused to participate in yet another reshoot, Rothman was forced to use a completely different actor for the new murder scenes. This meant Rothman now had to provide the Campbell character with the ability to magically transform his physical shape whenever he turned into a vampire, in order to explain why the vampire-killer looked nothing like Campbell. Almost all of the scenes Rothman added, including those with Sandra Knight, were among the most derivative, and therefore the weakest, in the film. This time around, Magee’s role was almost completely excised. He appears as the jealous husband of a nightclub dancer (played by Anna Pavane) who poses for Sordi but is not murdered. He tracks Sordi to his studio and attempts to kill the artist but is pushed into the boiling wax. For reasons known only to him, it was this version of the film that most pleased Corman, and it was subsequently briefly released to theatres by , retaining Hill's "Blood Bath" title. Both Hill and Rothman were credited as co-directors. The film's co-feature was the similarly eerie "", which was cobbled together by Corman and co-produced by Rothman.

A fifth version of the film exists. Rothman’s " Blood Bath" ran a mere 69 minutes, which was deemed too short for television showings. More new footage was added, including a six- minute sequence showing Linda Saunders dancing non-stop on the beach. The film was retitled "Track of the Vampire", and it is this TV-version that is the most commonly known of all five films today, available in a wide variety of “” videotapes and DVDs.

Music for the film was cribbed from scores that composer Ronald Stein wrote for earlier Roger Corman productions, most notably "The Undead" and "".

Despite the film’s chaotic manner of production, "Blood Bath" has its share of effective horror sequences. This, plus star William Campbell’s performance, has enabled the film to develop a small cult following. Mostly ignored by critics at the time of its initial release, most reviewers today find the film atmospheric but also generally agree that it is at best an entertaining mess. Michael Weldon, in his "Psychotronic Encyclopedia of Film", called it “a confusing but interesting horror film with an even more confusing history.”

In 1991, "" magazine devoted lengthy articles in three separate issues fully detailing the production history of the film. These articles included interviews with Hill and Campbell, the latter of whom expressed shock when he was told that the film he had shot so long ago in Yugoslavia had been turned into five individual movies.