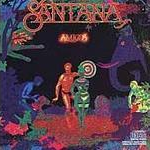 "Amigos" is a 1976 album from Santana. The album contained a minor hit single in "Let It Shine," and was the band's first album to hit the top ten on the charts (and ultimately reaching status) since "Caravanserai" in 1972. Arguably, "Amigos" could be viewed as a much more accessible album in comparison to the ones that preceded it.