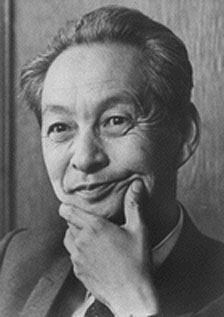 Sin-Itiro Tomonaga or Shinichirō Tomonaga (朝永 振一郎 "Tomonaga Shin'ichirō", , &ndash; , ) was a ese , influential in the development of , work for which he was jointly awarded the in 1965 along with and .

Tomonoga was born in in 1906. He was the second child and eldest boy of a Japanese philosopher, . He entered the Kyoto Imperial University in 1926. , also a winner, was one of his classmates during school. During graduate school at the same university, he worked as an assistant in the university for three years. After graduate school, he joined Nishina's group in . In 1937, while working in Leipzig, he collaborated with the research group of . Two years later, he returned to Japan due to the outbreak of the , but finished his doctoral degree on the study of nuclear materials with his thesis on work he had done while in Leipzig.

In Japan, he was appointed to a professorship in the Tokyo University of Education (a forerunner of ). During the war he studied the , theory, and his "super-many-time" theory. In 1948, he and his students re-examined a 1939 paper by that attempted, but failed, to show that the infinite quantities that arise in QED can be canceled with each other. Tomonaga applied his super-many-time theory and a relativistic method based on the non-relativistic method of and Fierz to greatly speed up and clarify the calculations. Then he and his students found that Dancoff had overlooked one term in the perturbation series. With this term, the theory gave finite results; thus Tomonaga discovered the method independently of and calculated physical quantities such as the at the same time.

In the next year, he was invited by to work at the in Princeton Township. He studied a on the collective oscillations of a quantum-mechanical system. In the following year, he returned to Japan and proposed the . In 1965, he was awarded the , with and , for the study of QED, specifically for the discovery of the method. He died in in 1979.