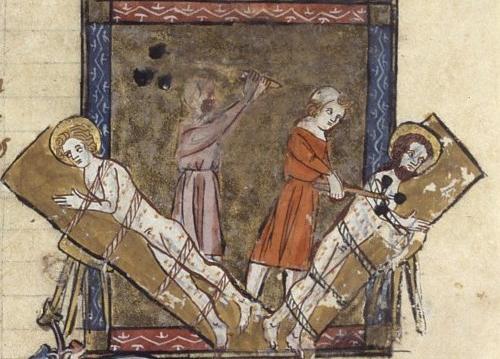 They are the of and of s and are invoked for the discovery of thieves. Their in the is on , the day marking the translation of their relics. In the their feast takes place on (O.S.)/ (N.S.), the traditional day of their death. In Christian their emblems are the scourge, the club and the sword.

The "Acts" ["Acta Sanctorum" June, IV, 680 and 29.] may have been compiled from a letter ("Epistle" liii) to the bishops of , falsely ascribed to . They are written in a very simple style; it has not been possible to establish their age. According to these, Gervasius and Protasius were the twin children of martyrs. Their father Saint Vitalis, a man of consular dignity, suffered martyrdom at , possibly under . The mother died for her faith at Milan. Gervasius and Protasius were imprisoned, and visited in prison by Saint Nazarius.

The sons are said to have been scourged and then beheaded, during the reign of the Emperor , under the presidency of Anubinus or Astasius, and while Caius was . Some authors place the martyrdom under the Emperor , but others object to this time, because it is not clear how, in that case, the place of burial, and even the names, could be forgotten by the time of Saint Ambrose, as is stated. It probably occurred during the reign of Emperor (161-180).

, in 386, had built a magnificent at Milan (the ). Asked by the people to consecrate it in the same solemn manner as was done in , he promised to do so if he could obtain the necessary relics. In a dream he was shown the place in which such could be found. He ordered excavations to be made in the cemetery Church of Saints Nabor and Felix, outside the city, and there found the relics of Saints Gervasius and Protasius. In a letter, St Ambrose wrote: "I found the fitting signs, and on bringing in some on whom hands were to be laid, the power of the holy martyrs became so manifest, that even whilst I was still silent, one was seized and thrown prostrate at the holy burial-place. We found two men of marvelous stature, such as those of ancient days. All the bones were perfect, and there was much blood." [ [http://urban.hunter.cuny.edu/~thead/gervase.htm Letter of St. Ambrose of Milan on the ] ]

St Ambrose had their relics removed to the Basilica of Fausta (now the Church of [ [http://urban.hunter.cuny.edu/~thead/gervase.htm Letter of Ambrose of Milan on the ] ] ), and on the next day into the basilica, accompanied in the texts by many miracles, emblemmatic of divine favor in the context of the great struggle then taking place between St Ambrose and the Empress Justina. [D. H. Williams, "Ambrose of Milan and the End of the Arian-Nicene Conflicts," Oxford: Clarendon Press, 1995 discusses the "inventio" and "depositio" of the relics as thecrowning gesture of Ambrose's triumph over the Arians.] Of the vision, the subsequent discovery of the relics and the accompanying miracles, St Ambrose wrote to his sister Marcellina.

, not yet baptized, witnessed these facts, and relates them in his "Confessions" (IX, vii), and in "De Civitate Dei" (XXII, viii) as well as in his "Sermon 286 in natal. Ss. Mm. Gerv. et Prot.". They are also attested by Saint Paulinus in his life of Saint Ambrose. The latter died in 397 and by his own wish was buried in his basilica by the side of these martyrs.

J. Rendel Harris, "The Dioscuri in the Christian Legends" (London 1903) addressed the subject of twin saints in Christian legend, who seem to be connected with the , whose cult was tenacious, to surmise from an oration decrying their veneration by ("Orations" 61.11). The historicity of Gervasius and Protasius was defended in the "Analecta Bollandist." (1904), XXIII, 427.

Immediately after the discovery of the relics by Saint Ambrose, the cult of Saints Gervasius and Protasius was spread in Italy, and churches were built in their honor at , and other places. In (modern-day ), we find churches dedicated to them, about 400, at , and . At the in , there is now a famous picture of the saints by (d. 1655), which was formerly in their church at . According to the "," (402-417) dedicated a church to them at Rome. Later, the name of St Vitalis, their father, was added to the title of this church (Basilica of San Vitale). Very early on their names were inserted in the .

A tradition claims that after the destruction of Milan by , his chancellor had taken the relics from Milan, and deposited them at in , whence some came to . The claim is rejected by Milan. [Biraghi, "Civiltà Cattolica", 1864, IX, 608, and XII, 345.]

Nevertheless, they were by farmers in Germany and a German saying amongst harvesters was: "Wenn's regnet auf Gervasius / es vierzig Tage regnen muss" ("When it rains on St Gervasius' Day / forty days of rain will follow"). [ [http://www.heiligenlexikon.de/BiographienG/Gervasius.htm Gervasius - Ökumenisches Heiligenlexikon ] ] Thus, as with the cults of , , the , and , that of Sts Gervasius and Protasius was connected with the weather.

A famous series of tapestries of the "Life of Gervasius and Protasius," donated to the Cathedral of Antwerp in 1509 is displayed in the cathedral's choir. [Laura Weigert, "Reconstructing Medieval Pictorial Narrative: Louis Joubert's Tapestry Restoration Project" "Art Journal" 54.2, Conservation and Art History, Summer 1995:67-72.]