Pohjola on a map of Turku.

Pohjola (Swedish: Norrstan) is a district of the city of Turku, in Finland. It is located to the north of the city centre, between Ratapihankatu and Kähäri. Turku Central railway station is located in Pohjola, and about half of the district's land area is owned by the VR railway company. 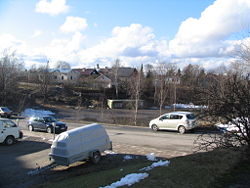 Image of sports field of Kähäri